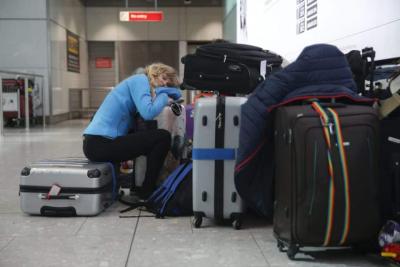 The longest delays are at London Luton, according to Press Association analysis of Civil Aviation Authority (CAA) data. Departures from the Bedfordshire airport were an average of 20 minutes late in 2017.

London Gatwick recorded the second worst performance, followed by Jersey and Durham Tees Valley. The ranking takes into account every scheduled and charter flight from 25 of the UK’s major airports.

Cancelled flights are not included. The average delay across all the featured airports was 15 minutes.

London Heathrow, the UK’s busiest airport, was found to have the best performance, with aircraft typically taking off 11 minutes late.

Punctuality is affected by factors outside airports’ control A spokeswoman for London Luton said: “We regret any delay our passengers experience.” She added that punctuality was influenced by “many factors” outside its control such as air traffic control strikes, late arriving aircraft, bad weather and congested airspace.

Gatwick declared it is doing “everything within its power” to improve the proportion of its flights that depart on time, including using new technology to predict and recover from late running flights and speeding up the time it takes to turn around inbound aircraft.

The ranking takes into account every scheduled and charter flight . Photograph: Getty Punctuality data enables passengers to “make informed choices about which airports they fly from”, a CAA spokesman said. “The aviation industry should constantly strive to improve punctuality to enhance the passenger experience,” he added.

A spokesman for the Airport Operators Association (AOA) said “outdated” airspace infrastructure limits the efficiency of flights. “The UK needs to modernise its airspace,” he explained. “Airports are working with air traffic service providers and the Government to plan and deliver the necessary changes so everyone can continue to fly with a minimum of delays.”

What can you do if your flight is delayed? Passengers on delayed flights from UK airports are entitled to assistance and compensation depending on the cause and length of the disruption. When flights are delayed for more than two hours, airlines have to provide free access to phone calls or emails, meals and refreshments, as well as hotel accommodation if an overnight stay is required.

How to claim your money back for free, from flight delays to PPI Passengers can also claim compensation when flights are delayed by more than three hours unless there are “extraordinary circumstances” such as severe weather or a security alert. Payouts range from 250 euro (£219) to 600 euro (£524) depending on the length of the flight and how long it was delayed. Alex Neill, a managing director at consumer group Which?, said delays are “one of the most frustrating things about travelling” and urged passengers to “claim what they are entitled to”. She added that airlines should introduce automatic compensation so people receive what they are owed “without having to jump through hoops”.

More in this category: « Electric bike revolution energises active travel Surfboards can go to Bali for free »
back to top
May 02, 2018