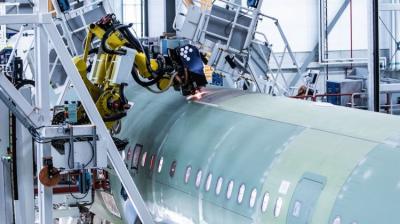 “The inauguration of our latest, most modern A320 production line opens a new chapter in efficient, digital aircraft manufacturing,” Faury said in a statement.

“With these new technologies we are building our aircraft more efficiently, a key enabler for higher production rates. I would like to thank the teams, who pushed this newest Airbus production standard from concept to reality.”

Airbus said the Hamburg line featured two seven-axis robots, named Luise and Renate, for automated fuselage drilling that were able to drill almost 80 per cent of holes on the upper side of the sections, which would improve the ergonomic working environment.

“The robots also drill with higher accuracy to ensure a constant level of production quality resulting in less rework. Furthermore, the new line features an innovative layout and the use of mobile tooling platforms that navigate autonomously with laser trackers,” Airbus said.

The design of the facility also ensured that all required materials would be within three metres of works stations as part of efforts to have a more efficient working environment.

These technologies could also be transferred to other Airbus production lines around the world, the company said.

In addition to the final assembly line, Airbus said its A320 Hamburg facility will also include a modernised delivery centre with more customer areas, more efficient delivery processes and increased hospitality services.

More in this category: « New Zealand passengers are losing out to monopoly airports Work underway for largest terminal upgrade since 1999 »
back to top
Jun 05, 2018