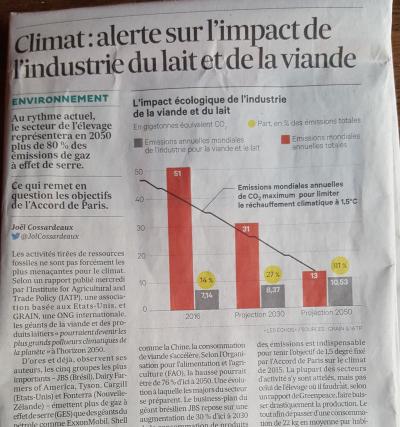 At the current rate, the livestock sector will account for more than 80 percent of greenhouse gas emissions in 2050.

This calls into question the objectives of the Paris Accords

Activities derived from fossil resources are not necessarily the most threatening for the climate.

This is according to a report published by the Institute for Agricultural and Trade Policy (IATP) an association based in the United States, and GRAIN an international NGO which claim that the giants of meat and dairy products "could become the biggest climate polluters on the planet" by 2050.

The world's 20 leading producers of meat and dairy products alone emit more than Germany, note IATP experts who see this trend accelerating in the future.With the development of the middle classes in countries like China, the consumption of meat is accelerating and according to the Food and Agriculture Organization (FAO), the increase could be 76 percent by 2050.

This is an increase in demand that the (meat) sector majors are in fact preparing for. The business plan of Brazilian giant JBS is based on an increase of 30 percent by 2030 in the consumption of meat products.This trend will lead to a 48 kilos per head per year consumption over and above the 37 kilos baseline in 1999.

REDUCE OUR CONSUMPTION OF MEAT This titanic commitment to reduce emissions is essential to meet the target of 1.5 degrees set by the 2015 Paris Climate Agreement. Most sectors of activity have tackled this, but not the one of livestock farming.According to Greenpeace the meat sector must drastically reduce its production to meet the Paris Accords.

According to Greenpeace this “drastic” reduction in meat industry output is vital in order to drop from an average consumption of 22 kg per head of population estimated by 2030 to a much lower per head consumption of 16 kg by 2050.

The industry is simply not taking the right road to solving the problem.

Only fourteen of the top 35 meat and dairy leaders have announced reduction targets. Only six of them have integrated GHG emissions imperatives into their supply chains, which represent up to 90 percent of the total.

The study concludes that only four groups provide "complete and credible emission estimates." These are Japanese NH Foods, the Swiss Nestle, the Dutch FrieslandCampina and the French Danone.

More in this category: « Strange Stuff Happened to Fairfax on its Way To Channel Nine Saudis Whip Canada Into Line over Womens Rights While New Zealand Government Deliberately Builds Energy Vulnerability »
back to top
May 31, 2018