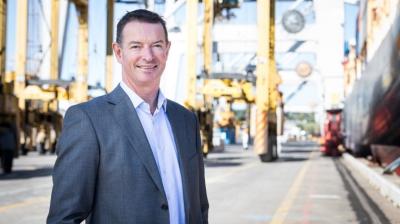 Ports of Auckland is hoping the chaos caused across the supply chain for importing vehicles earlier this year will not be repeated during the new season for brown marmorated stink bugs (BMSBs), which starts on September 1.

Tony Gibson, chief executive officer, says issues created by the stink bugs have been challenging for the port and its users. The crisis and its effects – severely felt between February and April – meant extended processing times with knock-on delays for other vessels causing queues in the Hauraki Gulf and up to six or seven ships waiting at anchor.

Others were harder hit with truckers, compliance centres, car importers and dealers “facing significant hardship” as the flow of stock temporarily dried up.

“On the positive side, the whole industry pulled together and I would like to thank all those who helped, particularly in dealing with the surge in imports after the initial interruption of supply,” says Gibson.

“We hope the new system put in by the Ministry for Primary Industries [MPI] will lead to a more predictable process and prevent future interruptions to the supply chain, while at the same time keeping this dangerous pest out of our country.”

He says the pure car carriers (PCCs) turned away from New Zealand were carrying 8,300 vehicles, “leaving customers and the industry waiting weeks to be able to pick up their vehicles and machinery”. The port worked closely with the MPI and fumigators during this time, which required adhering to strict biosecurity conditions.

“We utilised all berths for fogging treatment including our newest berth Fergusson North, which was still a construction site when the idea was floated,” says Gibson.

“It didn’t go unnoticed the first vessel that berthed at our new container terminal berth was actually a PCC. Due to the co-operative attitude of Ports of Auckland, the MPI, customers’ and fumigators’, delays were minimised as much as possible. Allocating Bledisloe Wharf for denied vessels allowed for low-risk vessels to work around them.”

Gibson notes “when the tap was turned back on” the port had a fresh problem – record incoming volumes.

“With a small land area, we don’t have much storage space so vehicles had to be taken off the port quickly to avoid the whole system getting clogged up. Everyone in the supply chain pulled out the stops to keep things moving 24/7.”

In some ways, this is a sign of things to come. As cargo volumes increase across the port, pressure on its land area will increase and the supply chain – for all cargoes – will have to move to greater use of weekends and nights to avoid congestion.

“While efficiency at the port and in the supply chain is essential, the stink-bug issue also highlighted the need for more infrastructure,” says Gibson.

The good news on that front is Auckland Council has endorsed the port’s 30-year master plan, including key projects for the general cargo wharves.

First up is a car-handling facility on Bledisloe Terminal. Resource consent will be sought for this later in the year with aim of starting work in early 2019.

“This building will give us additional car capacity and enable several other projects – a new roll-on, roll-off berth on the northern end of Bledisloe, the removal of part of shed 51 and B1 wharf to allow bigger ships to berth at B2, and removing Marsden Wharf to create a third ro-ro berth at Bledisloe South.”

Gibson emphasises “managing biosecurity risks is of paramount importance” to the port. “We all know the introduction of a new animal, plant or insect species could have devastating effects on our horticulture and agriculture industries.

“The BMSB has had devastating effects in Europe and North America since its infestation, wiping out fruit trees and crops. With a high reproductive rate, they are easily able to invade other regions and cause further damage.

“Farmers across North America increased their use of pesticides in response, and this led to an increase in production costs and reduced profitability. In some cases, such as organic farms, there was nothing that could be done to stop damage caused by the stink bug.”