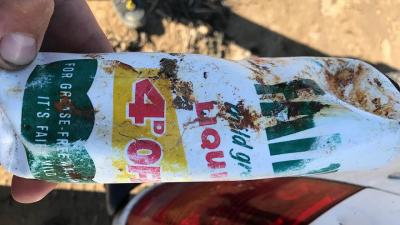 A plastic washing-up liquid bottle dating back at least 47 years has washed up on a British beach, prompting calls for action to combat the “modern-day scourge” of man-made waste reports  Alice Cuddy for EuroNews.

The Burnham Coastguard Rescue Team said the bottle of popular British dishwashing brand Fairy was found among large amounts of debris that swept onto a beach in Somerset, England, last week.

“This bottle has been floating around in our waters and still looks almost new,” the rescue team wrote in a Facebook post.

The bottle's age was deduced by a slogan on the front that reads "4D OFF", which means it must have been made prior to the 1971 decimalisation of Britain's currency.

At that time, the letter D was the symbol for pence.

“This is probably the oldest plastic we have seen,” the Burnham Coastguard Rescue Team told Euronews.

They added that almost 200 trainers and other items with American pricing had also been found on the beach.

The team described the decades-old bottle as a “stark reminder of what the long-term effects of plastic usage are”, as it called on people to be more diligent in disposing of rubbish in bins, to be more careful of what they flush down the toilet, and to join a local beach clean-up group.

There are an estimated 300 million tonnes of plastic littering the world’s oceans, with more than 5 trillion plastic pieces — weighing more than 250,000 tonnes — currently floating on the surface, according to marine conservation group Oceana.

Burnham Coastguard Rescue Team said it hoped the bottle “can be a kickstart to a change in people’s attitude towards single-use plastics in the future.”

More in this category: « World’s top scientists confirm that it is 100% possible to keep warming below 1.5°C Award-winning, life-saving ideas to beat antibiotic resistance, create near-zero waste, and test for pre-eclampsia »
back to top
Nov 26, 2018