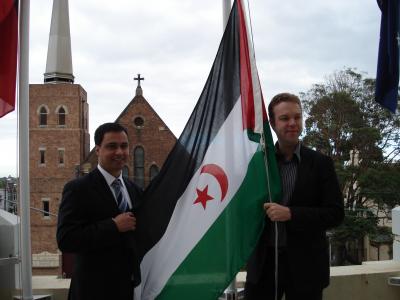 Western Sahara is exactly the same size as New Zealand. The fertilizer for which its supplies the raw material is the second largest on-farm cost after farm debt maintenance.

The superphosphate based on the feedstock from Western Sahara is usually regarded as boosting pastoral fertility by around 40 percent.

Internationally, many claim that only the application of phosphate from this region has enabled the world to feed a population that has compounded over the past 70 years and at time when a mass of pasture has become urbanised.

It was then that then Morocco in effect re-colonised it.

This was consolidated when Morocco built a wall literally in the sand along the spine of Western Sahara between itself and the Polisario, an organisation that represents Western Sahara and which campaigns to re-take a nation which it believed it would control after the withdrawal of Spain.

The UN has monitored a cease-fire between Morocco and the Polisario Front - an organization advocating the territory’s independence and which aims to restart negotiations over the status of the territory.

We interviewed Kamal Fadel the Saharawi appointed representative to Australia and New Zealand who is pictured with Jamie Parker, Member of NSW Parliament, raising the flag on the occasion of Saharawi National Day in February 2016…………………………

Morocco claims that less than seven percent of its total phosphate exports is located in Western Sahara territory. True or false?

The answer is that it is true. In fact a "less than 7%" annual export volume from occupied Western Sahara is more or less accurate. Mainland Morocco produces and transforms phosphate mineral rock into various commodities in a volume of about 25 to 30 million tonnes annually. In recent years, exports of unprocessed (raw mined) phosphate mineral rock from occupied Western Sahara have ranged between 1.6 to 1.8 million annual tonnes. There is a sufficient volume and acceptable quality of phosphate rock in Morocco proper to assure New Zealand's import needs. The public record (available documents and statements) is clear about this.

The source-supply of uranium was seen as a vital defence interest by some west countries during that era.) Second, that phosphate is sold relatively cheap despite its higher quality.

Morocco claims that Algeria is behind your independence movement?

The liberation struggle in Western Sahara begun in 1973 against Spanish colonialism by Saharawi people from inside the Territory and Algeria had no role in it. Algeria is amongst 80 countries that recognize the Saharawi Republic as an existing state and has done so for almost four decades. This is also what the African Union has long accepted. Does Algeria provide material support to the Saharawi people? It certainly does.

But so do numerous other countries in the Global South. Besides, any political or other support for the Saharawi people must be seen in the context of Algeria's principled position of support for self-determination of non-self-governing peoples worldwide. There's no inconsistency or particular departure from such a stance when it comes to Western Sahara. Are we correct in describing you as the representative of the Western Sahara government-in-exile?

The Saharawi republic controls and exercises its authority over a third of the territory of Western Sahara. So the Government is not in exile. I'm the appointed Representative to Australia and New Zealand. I also have diplomatic and executive responsibilities as a senior member of the SADR Petroleum & Mining Authority. In your opinion why has phosphate supply been so ignored in New Zealand and elsewhere when a phosphate shortage could be more severe than a petroleum shortage?

An excellent question, this. It's a complex matter that needs analysis. In simple terms, there was always, or always perceived to be, an assured supply of high quality phosphate mineral rock for New Zealand's two importing fertilizer manufacturers. Global market prices were stable for decades, averaging year over year about $30 USD per tonne (for general market sold phosphate, which has some 10-12 % less phosphorus content than that mined in Western Sahara), only increasing for a couple years after 2008. (Prices in the past 12-18 months are stable in the $90 USD per tonne range.)

This assured supply (which, it should be added, could be transported at relatively low cost as was revealed in the case of the m.v. "NM Cherry Blossom" in South Africa in 2017) went without political and diplomatic challenge to the two importing companies or any serious consideration by New Zealand's governments. What was (and is) a manifestly illegal trade went unremarked upon.

In the late 2000s, the Saharawi Republic was determined to preserve the country's natural resources pending the restoration of full sovereignty, that is, the completion of the UN-promised self-determination process, and explain to the world how the trade in natural resources from the territory perpetuates or deepens the annexation of Western Sahara. The decision to reclaim ownership of cargos aboard the m.v. "NM Cherry Blossom" and a ship bound for Canada at Panama, the m.v. "Ultra Innovation", were inevitably the next steps in this project.