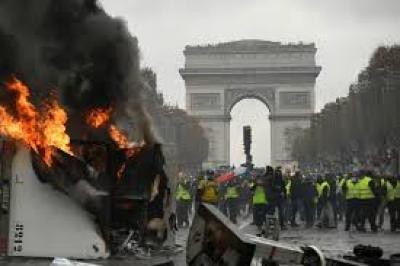 The trashing of the Champs Elysees by rioters wearing yellow hi viz jackets is a reminder to other left-of-centre governments in the developed world that fuel taxes even raised on grounds of environmental progressivism will ignite public volatility.

In France prices at the pump have already increased since the arrival of Emmanuel Macron in power, 14% for petrol and 22% for diesel in the space of 12 months between October 2017 and October 2018.

In France rioters can claim social licence, the right to wreck what they feel like wrecking, if they can prove an underpinning community objective which in the current case is the high cost of living in general and of private motor car propellant in particular.

The lesson of the current French civil upheaval for other developed countries is that France has a tightly networked, and highly subsidised public transport system in its metropolitan centres and also in its carefully nurtured rural districts.

While the government and its supporters seek to deflect the riots by claiming that the uprising is due to right-wing intervention, the evidence so far points to France’s unions and intellectual agitators.

In practical terms, the ructions are due to the over-promising inherent in any left-of-centre electoral upset.

Emmanuel Macron charmed his way into the Elysees Palace and largely did so by filling every box-tick in the wish-list of Europe’s political progressives.

The quest for ecological purity was chief among these.

The first crack in this perfect-worldism was that president Macron had to constructively sack the standard-bearer of it all, cabinet minister Nicolas Hulot.

Monsieur Hulot’s chief qualification for his job was presenting nature programmes on television.

His insistency that France should close down its nuclear power stations as soon as possible now sealed his fate..

Hulot now began to assume the status of martyr.

Hamlet-like he publicly ruminated on his future.

So up went the taxes on carburants, as fuel is known in France.

To add to this a new speed limit was also adopted of 80 kmh.

M Macron was the economics/industry supremo in the preceding socialist party government led by president Hollande.

He saw the weakness and the vulnerability in the Hollande government which was characterised by president Hollande’s perceived inability to act decisively in the face of, for example, islamist terrorism.

President Macron’s strategy of appeasing his progressive ecological base while keeping the faith with the car-loving electorate at large who insist on driving to work demonstrates characteristics of the vacillation of president Hollande.

The symbolic wrecking of the Champs ELysee comes at a time when the EU is still actively encouraging Britain to have second thoughts about quitting the EU.

There is too an echo of the 1968 student-led riots, the most dangerous manifestation in recent times of the disaffected French citizenry to exercise their right of social license.

The 1968 riots in Paris are often viewed as the beginning of the end of France’s era of post war growth in which France exercised a united community of purpose and thus prosperity which at the time still eluded Britain.