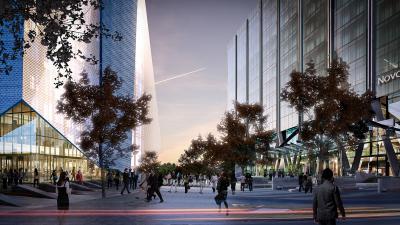 Auckland Airport and Tainui Group Holdings have announced an agreement to develop a new 5-star hotel adjacent to Auckland Airport’s international terminal and the existing 4-star Novotel hotel. The new premium 250-room hotel will be operated by AccorHotels under the Pullman brand.

While the additional hotel development has long been a feature of Auckland Airport’s ‘airport of the future’ vision, Mark Thomson, Auckland Airport’s general manager - property, says the timing has been influenced by unprecedented demand for hotel accommodation in Auckland. Building the hotel now also responds directly to strong demand for accommodation that provides easy access to the airport terminals.

“Auckland Airport plays a key role in New Zealand’s growing tourism industry and in connecting Auckland to New Zealand and New Zealand to the world. This hotel, which will benefit from its premium location adjacent to the international terminal and the current Novotel, will provide more choices for travellers looking for high quality accommodation within walking distance of both terminals,” says Mr Thomson.

“Being able to walk to the terminals, rather than drive, has considerable appeal to hotel patrons and will also help reduce vehicle movements on our roads.”

The new hotel will trade as the Pullman Auckland Airport and will be developed in a 50:50 partnership with Tainui Group Holdings. As part of this agreement, Auckland Airport has increased its ownership stake in the Novotel hotel to 50%.

“The partnership with Tainui Group Holdings and AccorHotels has been very successful and we are pleased to be extending this relationship to another hotel project,” says Mr Thomson.

The hotel building will carry the name ‘Te Arikinui’, which is the chiefly title that the Late Maori Queen Te Atairangikaahu chose when she ascended to the Te Wherowhero (throne) at the time of her Coronation. The chiefly associations of Te Arikinui are in keeping with the 5-star premium experience to be offered at the hotel.

“This is an exciting project that will result in two complementary assets located in an exceptional position at New Zealand’s main gateway. This creates tremendous scope to create a unique, authentic New Zealand experience for airport visitors and hotel guests including through unique cultural elements incorporated in the design,” says Mr Joblin.

Construction is expected to start by the end of this year, with the hotel scheduled to open by late 2019. By this time, Auckland Airport’s international terminal will have undergone significant expansion and work will already be underway on the domestic section of our future combined domestic and international terminal.

Auckland Airport is currently investing more than $1 million every working day on infrastructure improvements, and expects this level of investment will likely continue into the near future.

More in this category: « Phuket with Qantas AirBNB buys Luxury Retreats who have 14 NZ properties »
back to top
Mar 26, 2018