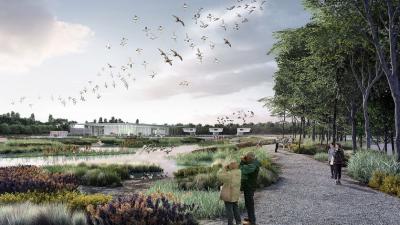 For a country that has received so much flak for its rate of environmental decline, China really seems to be pulling up its socks—and setting a global precedent while they are at it. The most recent development in the country’s bid for an ecologically-minded future is the Liangang Eco Park, a rest-stop for migrating birds.

Fifty million birds make the journey from the Arctic Circle down to Australia and New Zealand each year. Most intertidal areas along the way in East and South East Asia where the birds might have stopped to feed over the course of their journeys have now been encroached upon by coastal urban development; meaning fewer birds are able to survive the seasonal ordeal, and a large number of species are slowly going extinct. The Liangang Eco Park is set to reverse the damage done.

Landscape architects McGregor Coxall have designed the sanctuary over 60 hectares—over a landfill site in the Liangang area of Tianjin city—and have made provisions for three different water habitats, suited for 50 species of birds. Working in close collaboration with ornithologists Avifauna Research, the architects have made calculated decisions to include relevant site soils, feed sources and vegetation. Water—sourced from rain harvesting and the recycling of water waste—will be moved through the park’s wetlands by renewable energy mechanisms. A 20-hectare forest will surround the wetlands to protect from urban intrusion.

The idea is nothing short of brilliant: besides offering much-needed respite to migratory bird species, it gives the city of Tianjin a new set of lungs, in addition to providing residents with an outdoor recreational space. Two, it brings in tourist revenue—the park is slated to received nothing short of a half-million visitors each year. For this, the architects have designed the Water Pavilion, a high-tech education and research centre, from which visitors can watch the birds through 14 cameras hidden around the sanctuary. Additionally, there will be three observation pods, wetland trails, a cycle circuit and a forest walk.

The park is slated to open in 2018. Here’s hoping we see similar eco parks come up closer home.

More in this category: « London with Singapore Airlines Air New Zealand and Cathay Pacific extend alliance »
back to top
Apr 02, 2018