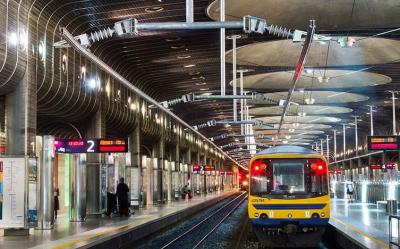 “We’ll look to be the largest infrastructure firm in the world -- both construction and design,” Burke said Monday in an interview at Bloomberg’s Los Angeles bureau. “I’ve got to spend $3.5 billion, and we think it’ll be spent on good, solid strategic acquisitions. We will grow organically also.”

Infrastructure spending by the U.S. government is likely to grow because it’s one of the few priorities shared by President Donald Trump, Republicans and Democrats in Congress, and voters, Burke said. Trump told Congress last week he wants to spend $1 trillion on infrastructure, a proposal Burke expects to be detailed later this year but that will take years to implement.

“I think a plan will be put in place before the end of 2017,” he said in a Bloomberg Television interview later Monday with Vonnie Quinn. “And then it will be implemented over the course of ’18 and ’19 and forward.”

The last major acquisition by Los Angeles-based AECOM, which reported $17.4 billion in revenue in the fiscal year that ended Sept. 30, was URS Corp. for $5.6 billion. The 2014 deal “created synergies” of about $325 million, exceeding projections, while also helping AECOM win more bids because of expanded capabilities, Burke said. AECOM has landed $12.3 billion of new projects over its two most recent quarters, he said, putting it on pace to surpass last year’s revenue.

More in this category: « Getting the steel from Napier to Queenstown Who was the First Engineer? »
back to top
May 23, 2018

Asbestos removal not just a risk for the worker