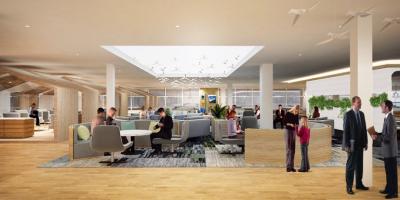 A renamed and extended Emperor’s Lounge, plus upgraded wifi are among the changes complementing Auckland Airport’s launch of its new Strata Club.

The club is a new app-based loyalty type programme designed to recognise travellers’ choices with personalised services and benefits. Strata Club benefits are offered in tiers based on a customer’s purchases over a year and are available to all international and domestic travellers, regardless of their airline and class of travel, as well as to everyone visiting Auckland Airport’s international and domestic terminals.

The Emperor Lounge, the international premium lounge owned and operated by Auckland Airport, is being renamed Strata Lounge. It is being expanded and refurbished and will open in a new location by August 2017. Strata Club Members will collect Strata Points and accrue tier spend when they book their lounge visit online and 24 hours in advance.

The first stage of wifi infrastructure and services for customers is also complete and complements the launch of the club. Improvements include offering customers a choice of time allowances and data volumes according to their needs and Strata Club tier.

Jason Delamore, Auckland Airport’s general manager – marketing and technology, says Strata Club is one of the ways the airport is investing in getting to know its customers better so they can be provided with more personalised services and benefits.

Examples of benefits include longer access to free wifi, parking upgrades and discounts, and special offers from participating retailers (such as duty free and food and beverage outlets).

More in this category: « The Ruling on the Travel Ban: A Lose-Lose Scenario for Business Travel and the Economy Emirates introduces tablet loan service to USA »
back to top
Apr 24, 2018