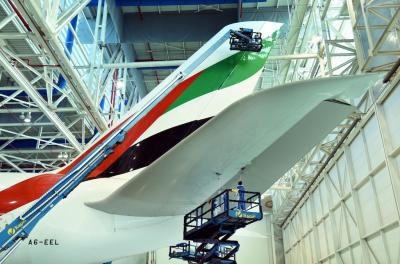 Emirates has celebrated World Environment Day by showcasing an environmentally friendly aircraft cleaning technique that has enabled the airline to save millions of litres of water every year.

Emirates uses the ‘aircraft drywash’ technique to clean its aircraft. As indicated by the name, little or no water is involved in cleaning the aircraft, which is in contrast to conventional methods of aircraft cleaning which typically use thousands of litres of water per wash.

Since early 2016 Emirates has been using an aircraft drywash technique to clean its fleet of over 250 aircraft, including the A380s that serve New Zealand five times daily.

In this technique, a liquid cleaning product is first applied manually to the entire external surface of the aircraft. Clean microfibre fabric is then used to remove the cleaning product which has dried to a film, removing the dirt along with it and leaving the aircraft clean and polished. The aircraft is left with a fine protective film allowing the painted surface to retain a longer gloss and shine. It takes a crew of 15 staff about 12 hours to clean an A380 and about nine hours to clean a Boeing 777 aircraft.

Watch a video of an Emirates Airbus A380 undergoing a drywash at the Emirates Engineering hangar in Dubai.

There are multiple advantages to using the drywash technique. The first is that there is little use of water to clean the aircraft. When consolidated over its fleet of 260 aircraft, Emirates saves over 11 million litres of water every year. Additionally the waterless aircraft wash technique ensures that the aircraft remains cleaner for a longer period of time thereby reducing the number of times the aircraft has to be washed to about three times a year, and also reducing the aircraft’s fuel consumption because of less accumulation of dirt.

Operationally, it is possible for other maintenance work to be carried out on the aircraft in parallel during a dry wash which is not possible when the aircraft is being washed with water due to the sensitivity of instruments to water.

Emirates is committed to being an environmentally responsible airline and operates one of the world’s youngest and most fuel efficient fleet of aircraft. In addition to the adopting drywashing for its aircraft, the airline has adopted a number of other energy efficiency initiatives across its operations.

Engineering and MaintenanceEmirates uses an innovative foam wash technique for cleaning aircraft engines that allows the airline to save about 200 tonnes of carbon dioxide emissions per year across its fleet. Other initiatives include the installation of a one megawatt array of solar photo voltaic panels at the state of the art Emirates Engine Maintenance Centre in Dubai. The panels generate over 1,800 megawatt-hours of electricity every year, helping save around 800 tonnes in carbon dioxide emissions. Emirates Engineering has also installed energy saving LED lights triggered by motion sensors substantially reducing electricity consumption.

A Greener TomorrowThrough its ‘A Greener Tomorrow’ programme, Emirates has provided funding to non-profit organisations across the world who work to conserve and safeguard their local environments. Funds for the initiative are raised entirely through the Emirates Group’s internal recycling programmes. For more information, read the Emirates Group Environmental Report 2016-17 here.