Hyperloop One has first successful test 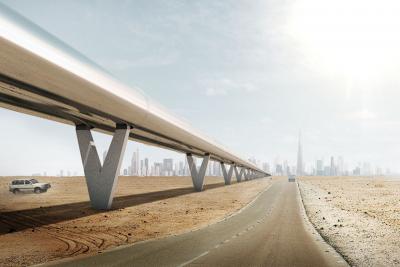 At two minutes after midnight on May 12th, the hyperloop became a little bit less of a pipe dream and little bit more of a reality. On that day, the Los Angeles-based startup Hyperloop One conducted the first full-system test of its technology in the desert north of Las Vegas. As several dozen of the company’s engineers and executives watched an array of monitors nervously, a metal sled accelerated to 70 mph (112 km/h), achieved levitation, and flew about 500 feet (152 meters) down the length of a 1,600-foot (487-meter) steel tube that had most of the air sucked out of it.

On the surface, it seemed like a nondescript event, but nonetheless the group broke out into ecstatic cheers. Hyperloop One co-founder and chief engineer Josh Giegel nervously fumbled with a bottle of champagne as he thanked his wife, while executive chairman Shervin Pishevar wiped away tears.

A little more than two months later, Giegel and Pishevar sat down with me in a private club in midtown Manhattan to talk about that day — and more importantly, what comes next. The elation of that moment had worn off, and both men were eager to get back to work on their dream of building the world’s first hyperloop system. The concept of nearly supersonic travel through hundreds of miles of vacuum-sealed tubes will always seem outlandish to most people. But then again, most people haven’t heard of Hyperloop One.

Continue to read the full article . . .

More in this category: « Cabin brings the sleeper bus concept to America Battery trains to be approved for Pukekohe »
back to top
Mar 21, 2018