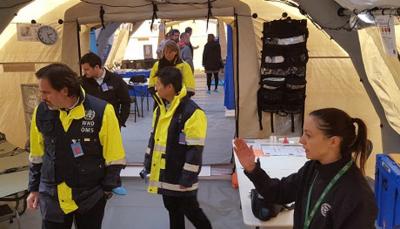 A high-tech tent hospital has improved New Zealand’s ability to save lives and give emergency health care when disasters strike at home or in the wider South-West Pacific region.

“We’re thrilled to gain WHO classification because it means our team meets international standards and we’re self-sufficient to provide emergency health care for at least 100 patients per day for 14 days, whether in this country or to support our Pacific neighbours,” says Ministry of Health emergency management director Charles Blanch.

“It’s vital we are able to increase our capability for disaster responsiveness for our region because we know early treatment in disasters saves lives.”

Last month, WHO representatives visited New Zealand to put the team through its paces, making sure it could safely and efficiently deploy to a disaster zone within 72 hours.

NZMAT’s new emergency tent features a series of interconnecting sections for triage, maternity, resuscitation, a 10-stretcher observation ward, and a pharmacy. There’s also storage, and an administrative command and control area. It carries sufficient equipment and medical supplies to treat 1400 people in two weeks, including making its own drinking water from raw or salt water.

Blanch says it can be swiftly erected in 90 minutes and arranged in different configurations depending on the space available and needs. It is easy to transport and gives great flexibility for the team to respond to different emergencies in remote locations.

The World Health Organization has praised the Ministry of Health and the New Zealand Government for meeting its international standards.

“We congratulate the New Zealand Medical Assistance Team on its achievements and thank them for their commitment to this quality assurance process and their future assistance to those in need after disasters and emergencies,” its verification team told the Ministry.

BackgroundNZMAT is a civilian-based emergency medical team that can be deployed to support local health services in a major emergency or disaster in New Zealand or the South-West Pacific. The team includes doctors, nurses, paramedics, allied health and non-medical members, such as logisticians and emergency managers.

It has been developed over the last 6 years following the Samoan 2009 tsunami, and to date, has deployed to the Solomon Islands, Philippines, Vanuatu and Fiji.

NZMAT involves a partnership between the Ministry, Counties Manukau District Health Board, Fire and Emergency New Zealand, the Ministry of Foreign Affairs and Trade, and about 150 trained staff from across the health sector.

A four-day training course for new NZMAT members next month will include using part of the new tent hospital.

More in this category: « NZMEA renamed The Manufacturers' Network $40,000 MPI funding to get high value ginseng exporting »
back to top
Nov 08, 2018