Royal Enfield opens its new innovation factory in the UK 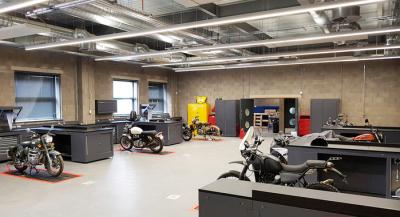 7 Nov  -  Royal Enfield has inaugurated its new Technology Centre in Bruntingthorpe Proving Grounds, Leicestershire. The brand new facility, located at the heart of the central Midlands area of UK, is housed at the largest privately owned vehicle test track facility, thereby ensuring ease of access to a host of vehicle development, engineering and testing-related​ ​facilities. The choice of location suits the iconic motorcycle manufacturer considering Bruntingthorpe Aerodrome and Proving Ground first opened in 1942 for the Royal Air Force (RAF) and hosted both the RAF and US Air Force.

In line with its aim to expand and make gains in the fast-growing global midsize motorcycle segment (250-750cc), Royal Enfield says it has been investing extensively towards increasing capacities, infrastructure and product, and as well as people capabilities. The new technology centre in the UK was set up with a view to bring a more global approach towards product and technology. Also,​ ​the​ ​fact​ ​that the ​​UK​ ​is​ ​the​ ​birthplace​ ​of​ ​the ​brand which made its first motorcycle in 1901,​ ​made​ ​it​ ​an​ ​obvious​ ​choice.

Seeing tomorrow todayUKTC, which has a contemporary and futuristic industrial look, is spread across 3,000 square metres and over two levels. It essentially is a modern workspace for employees, with an Industrial Design Studio, Engine, Electrics, Chassis Build, Spray-shop, Model-shop, Metal work and Part store on the other floor.

The spacious Industrial Design Studio has variable-height modelling platforms and a suite of workshop facilities to bring the majority of model preparation in-house. The Engine Test building, spread across 470 square metres, houses the​ ​latest​ ​dynamometers​ ​and​ ​emissions​ ​equipment​ ​for​ ​testing.

Since commencing operations in January 2015, the UKTC now has over 120 employees working on multiple projects, that includes development of future products and platforms. The first modern Royal Enfield 650 twin and the new range of motorcycles​ ​has​ ​been​ ​developed​ ​between​ ​the​ ​teams​ ​at​ ​UKTC​ ​and​ ​Chennai,​ ​India.

Back to the futureWikipedia has it that Royal Enfield was a brand name under which The Enfield Cycle Company of Redditch, Worcestershire sold motorcycles, bicycles, lawnmowers and stationary engines which it had manufactured. Enfield Cycle Company also used the brand name Enfield without Royal. The first Royal Enfield motorcycle was built in 1901. Enfield's remaining motorcycle business became part of Norton Villiers in 1967 and that business closed in 1978 after which Royal Enfield, as we know it in India, began manufacturing motorcycles in Chennai.

Riding a wave of demandRoyal Enfield currently is witnessing a surge in demand for its products and with its new manufacturing base in Chennai, the company has been able to grow its production rapidly. Since the past five years, it has notched over 50 percent growth every year. Royal Enfield’s product line-up in India includes the Bullet, Classic and Thunderbird models in 350 and 500cc displacement​ ​along​ ​with the Continental GT 535cc café racer and the purpose-built Himalayan adventure bike powered by the new LS410 engine.

The company operates through 17 company-operated stores and over 705 dealers in all major cities and towns in India, and exports to over 50 countries across the world including the USA, UK, several European and Latin American countries, as well as the Middle East and South East Asia.

More in this category: « McLaren develops composite body armour for healthcare David Dicker - An extraordinary man, an extraordinary vision »
back to top
Jun 07, 2018