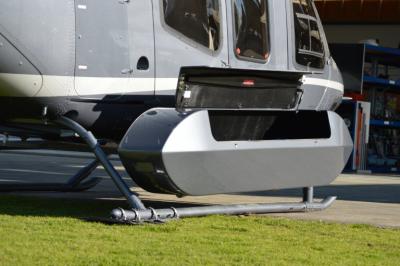 In early 2017, engineering manager Russell Goulden was approached by a private owner who was unhappy about a recently purchased cargo basket. With the possibility of making changes to the H125 Series cargo pod for the Bell 429, Goulden knew this was a project he and his team could accomplish. Oceania Aviation’s streamlined cargo pod has a much lower drag penalty than wire mesh type of basket, and it keeps valuable property safe from the elements as well as being locked when the aircraft is parked.

Having successfully received NZCAA, TC and FAA approval for role equipment used on the H125 (AS350 and AS355) and MD500 Series helicopters, Goulden is well accustomed to the STC approval processes.

“We are always excited to increase our product range, but, more importantly, to increase operational capability of an aircraft. At the end of the day we provide operators with a solution to increase the capabilities of their aircraft which can transform into increased revenue and satisfaction,” said Goulden. “This makes our work very fulfilling. Working alongside operators to create a product that best suits their needs is exactly what we want to be doing.”

With adjustments to the current H125 Series cargo pod, Airborne Systems have created and received approval for a fully composite cargo pod designed for strength and lightness, becoming the epitome of externally mounted storage on the right side of the Bell 429 aircraft.

Oceania Aviation’s cargo pods are currently utilized on AS350s and AS355s for heli-skiing, tourism, logging and utility operations in New Zealand, Canada and more recently in the United States. Having displayed the cargo pod at the annual HAC convention and trade show in Ottawa, Ontario, the reviews of the pod have been very positive.

According to Oceania Aviation, the new owner of the Bell 429 cargo pod was so impressed with the Airborne Systems working on a Bell 429 bike rack.

Goulden and his team are also in the process of achieving several modifications for the MD 902 helicopter including a seat shift kit, cargo hook mirrors, camera mounting systems and more.