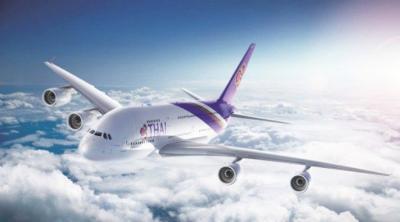 Dec 7, 2017  -  Thai Airways celebrates 30 years of flights between Auckland and Thailand today, marking a longstanding commitment to New Zealand as the only carrier to consistently service the Auckland-Bangkok route.  On 6th December 1987, the first official Thai Airways passenger jet service, operated by a DC-10 aircraft, touched down at Auckland Airport.

Initially operated as a direct twice weekly service between Bangkok and Auckland, over the last thirty years the service has increased to daily with the recent launch of the new 787-9 Dreamliner on 17 November. The new offering marks a two-way tourist capacity increase from its five times per week service.

The new Dreamliner flight has added 600 weekly seats to the service, which serves as a popular connecting route to the rest of Asia and beyond to Europe.

Mr. Chantalitanon said that Thai Airways are proud of the legacy that the airline has established here in New Zealand.

"Over the last 30 years, Thai Airways has provided both New Zealand travellers and exporters access to Asia and beyond. Given that Thailand is now a leading tourist destination and New Zealand’s eighth largest export market, this is a relationship we are committed to growing."

"The increase to a daily flight service with last month’s launch of the new Dreamliner is testament to the growing significance of this route," says Mr.Chantalitanon.

Thai Airways operates 100 aircraft to 63 destinations in 33 countries across Asia/Pacific, Europe and the Middle East.

Over a million Kiwis have travelled to Thailand since 1987. Today Thailand is one of the top holiday destinations for New Zealanders.

Thai Airways 30th Anniversary will be officially celebrated tonight at the ANZ Viaduct Events Centre where long supporting travel agents and cargo agents will be recognised for their contribution to the airline over the last thirty years.