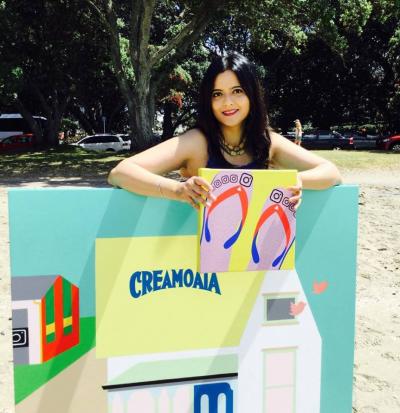 Dec 12, 2017  -  Tourists to New Zealand have, in the past, not heard of Kiwi icons such as jandals, creamota, Chesdale cheese, eskimo pies, buzzy bees and pineapple lumps. But over time, symbols and icons representing a culture like New Zealand have changed and merged with the global environment, leading Auckland artist Rewa Walia says. She is staging a major symbolic art exhibition - Abducted – at the Depot Artspace, in, Devonport, Auckland from December 28 to January 17. With the rapid onslaught of digital technology and social media symbols which are not restricted to a land or physical territory, Kiwi icons are becoming more well known around the globe, Walia says. “New Zealand is just the same as any other place with internet connection in the world, where YouTube, Facebook, twitter and google are accessible at the click of a button. My symbolic series explores the possibilities of the blurring of cultural identities and a new formed universal one which everyone can relate to. “I've adapted the old New Zealand icons, brand logos and brand ambassadors from communication and advertising messages and fused them with the global icons of the digital world. “The finished work delves into the medium of communication from the past and present in New Zealand, with an emphasis on social media and the need of repetition in communication of messages mass produced. “Christmas in New Zealand is a special time when people get the opportunity to unwind and soak in the beauty of nature and beautiful relationships as they meet and greet family and friends. We are exposed to thousands of messages every day and I've created artwork using social media and popular symbols used in the digital and real world. “We live in a world driven by choices, some forced upon us and others we make to fit in, creating an alter identity far removed from nature. “A virtual world does not engage all the senses and life spent mostly in front of a digital device especially during Christmas time, when we need to engage with family and friends instead of connect with people in cyber space is a life less lived. Imagine getting the full benefit of human connections and nature at its best this summer. Do it differently this holiday season and say no to the digital world and yes to the real. “Social media is another result of consumerism, taking up time we would have otherwise spent on human relationships, creation and small acts of daily life that we used to take for granted. The more time we spend on digital technology and social media, the less time we will have for these intimate moments and physical expressions of creativity. “It is very easy to be consumed by cyber space so much so that you start to question, what is reality? In the moment that I create art, that is my reality and then it changes at the flick of a button.” Walia’s works are featuring in one of the world’s biggest digital online art exhibition on the Wrong Pavilion website, with a page dedicated to her work. The online exhibition will remain open until January 31.