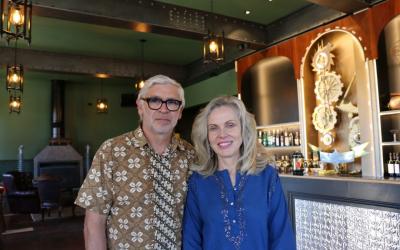 Dec 18, 2017  -  Kiwiana, heritage, steam punk and luxury have merged at one of Featherston’s most loved historic buildings, which is reopening this week writes Hayley Gastmeier in the Wairarapa Times Age.

In all its glory, The Royal Hotel will be back in business from Wednesday, after an extensive two-year makeover.

Owners Rob Allen and Janelle Harrington bought the prominent Revans St building when it came up for sale in 2015.

The couple has put in considerable effort to ensure the hotel reflects both its own roots, and the history of the town.

Inspired by the town’s rail history, the hotel has tapped into the steam punk genre, while also embracing the coming together of Maori and Pakeha, as well as the town’s military history.

The hotel’s 12 upstairs bedrooms each have its own “personality”, themed on a unique character.

Most have elegant ensuites, in which the basins have been cleverly crafted with vintage sewing machine bases.

The largest room “belongs” to King Tawhiao, who was leader of the Waikato tribes and was the second Maori King.

Other rooms are themed after Victorian writers, such as Jules Verne (author of 20,000 Leagues Under the Sea), classic children’s books, and inspiring people of the past, such as Meri Te Tai Mangakahia, a campaigner for women’s suffrage in New Zealand.