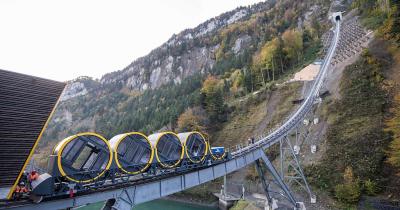 Dec 19, 2017  -  The world’s steepest funicular line - which can climb a 110% gradient - has opened to the public at the Alpine resort of Stoos in central Switzerland.  Swiss President Doris Leuthard officially opened CHF52 million ($53 million) project running from Schywz to the mountain village of Stoosexternal link, which lies 1,300 meters above sea level, on Friday evening. The public got their first taste on Sunday. Saturday was reserved for the locals.

Continue here for a look at what can be seen when in the funicular.

The funicular opened two years later than planned due to engineering and money problems. But this was forgotten as Leuthard cut the red ribbon. In her speech, she praised the project’s organisers for their courage. Many funiculars are not profitable. “But the board, canton and the region believe in the future. I am convinced that this will pay off,” she said.

Leuthard, who also head the transport ministry, said that the funicular would also serve locals as well as tourists. “This is what characterises Switzerland, that we offer a service that everyone can use.”

The barrel-shaped carriages adjust their floors so passengers can still stand upright while they climb towards the Alpine plateau at inclines of up to 110%.

The train follows a 1,720-metre track, climbing or descending 743 metres. It reaches speeds of up to ten metres per second. The whole trip lasts around four minutes.

The railway replaces an older one that has been in operation since 1933. “After 14 years of planning and building, everyone is very proud of this train,” said Ivan Steiner, spokesman for the railway.