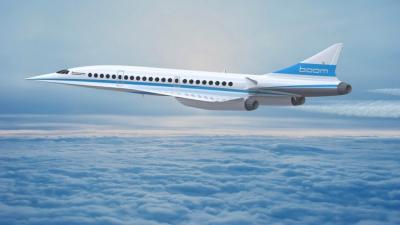 Jan 9, 2018  -  Supersonic passenger flight at reasonable cost has come a step closer with the news that Japan Airlines (JAL) has joined US aerospace developer Boom Supersonic to bring commercial supersonic travel to passengers at fares about the same as today’s business class tickets.

Boom is developing a new-generation supersonic aircraft which flies at Mach 2.2. That’s about 2700 km/h, which is faster than Concorde. The new plane will cut flight times in half and developers say fares will be 75% lower than Concorde. JAL will provide its knowledge and experience to support Boom in developing the aircraft, joining the Virgin Group in backing the project. A smaller test aircraft is set to fly this year.

As part of the agreement, JAL has made a strategic investment of USD 10 million in Boom and is collaborating with the company to refine the aircraft design and work on the passenger aspect. JAL also has the option to purchase up to 20 Boom aircraft through a pre-order arrangement, with the two companies pledging to cooperate closely to realise faster and more convenient air travel.

A promotional video leaves no doubt about the sort of possibilities such a plane will open up from the US.

Imagine a future “where New Zealand becomes as accessible as New York,” the narrator says.

This will make Boom 2.6 times faster than any other commercial passenger aircraft currently in the skies.

Engineering development of the smaller test aircraft, the XB-1 (nicknamed “Baby Boom”) is proceeding rapidly, with aerodynamics defined, systems ground-tested and initial structural components in fabrication, the manufacturers say. Vehicle assembly is underway and the first flight is planned for later this year. Subsonic flight tests are being conducted east of the Denver metro area in Colorado, with supersonic flight proven near Edwards Air Force Base in Southern California.

“We’ve been working with Japan Airlines behind the scenes for over a year now,” said Blake Scholl, founder and chief executive of Boom Supersonic.

“JAL’s passionate, visionary team offers decades of practical knowledge and wisdom on everything from the passenger experience to technical operations. We’re thrilled to be working with JAL to develop a reliable, easily maintained aircraft that will provide revolutionary speed to passengers. Our goal is to develop an airliner that will be a great addition to any international airline’s fleet.”

President of Japan Airlines, Yoshiharu Ueki, said JAL was “very proud to be working with Boom on the advancement in the commercial aviation industry.

“Through this partnership, we hope to contribute to the future of supersonic travel with the intent of providing more time to our valued passengers while emphasizing flight safety.”

Boom’s engineers say they have already made key contributions to 40 new aircraft and conducted test flights to Mach 3 (3680 km/h).

More in this category: « EasyJet Is Transforming the German Market With Launch of Domestic Routes Emirates and flydubai to offer travellers even more connections in 2018 »
back to top
Jul 05, 2018