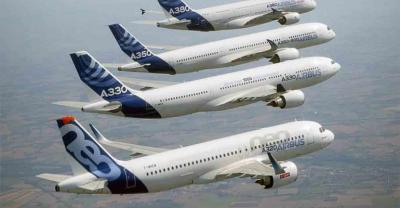 Boeing earlier reported 2017 deliveries of 763 new aircraft, allowing it to claim that title for the year just concluded.

The impressive increase in new orders left Airbus with a backlog of 7,265 aircraft at the end of 2017, which it estimated at $1.059 trillion at list prices.AirbusAirbus 2017 totals infographic

The jet builder illustrated the highlights of its 2017 deliveries and new orders.

“A new Airbus delivery record coupled with our fifth best order intake wraps up a remarkable year for us,” stated Fabrice Brégier, Airbus COO and president of the Commercial Aircraft unit. “This outstanding achievement is testimony to the dedication of all our teams, and makes the company fitter, stronger and ready for the opportunities ahead.”

Related: Airbus Set a New Record for Jet Deliveries in 2016

Airbus showed particular strength in deliveries of single-aisle aircraft too, with 558 of its A320 series delivered, and a considerable increase in deliveries of wide-body aircraft: 67 A330s and 78 A350 XWBs, and 15 A380s.

More in this category: « Bristol freighter returns to the UK from Ardmore Utilisation figures on Wellington-Canberra route revealed »
back to top
Aug 09, 2018