Qatar Airways has taken delivery of its first Airbus A350-1000. 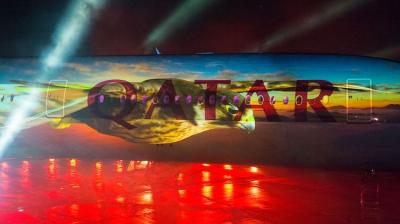 Qatar Airways takes delivery of first Airbus A350-1000.  The official handover ceremony took place on Tuesday (European time) at Airbus’s headquarters in Toulouse, France.  The aircraft, A7-ANA, is the first of 37 A350-1000s Qatar Airways has on order. It is powered by Rolls-Royce engines.

The first A350-1000 was due to be delivered in December 2017. However, issues with cabin finishings pushed back the event until February 20.

The business class QSuites features an innovative new seat design which is already flying on a number of Qatar’s Boeing 777-300ER aircraft. Passengers have the option to have a set of four seats face each other so those travelling in a group can conduct meetings, socialise or share a meal together, while still providing the now-standard flatbed and direct aisle access for every passenger in business class.

Doha-London Heathrow will be the launch route for the aircraft.

“Qatar Airways always demands the very best for its customers, so it is right that we are the first airline in the world to fly the Airbus A350-1000,” Qatar Airways chief executive, Akbar Al Baker said in a statement,

“This remarkable state-of-the-art aircraft will become a firm part of Qatar Airways fleet and will keep us ahead of the curve, allowing us to continue to offer our passengers outstanding levels of comfort and service”.

Airbus Commercial Aircraft president Fabrice Brégier said there was huge pride at the company following the delivery of the aircraft to Qatar Airways.

“Bringing major advantages in fuel and cost efficiency along with unmatched passenger comfort, the A350-1000 is the ideal aircraft to showcase Qatar Airways’ legendary customer service,” Bregier said.

“With its greater capacity compared to the A350-900, the newest widebody will play a major role on the carrier’s busiest long-haul routes and will contribute to strengthen their position at the forefront of the aviation industry.”

The Doha-headquartered carrier was also the launch customer of the A350-900.

Continue here on Australian Aviation to read the full article with video and images ||  February 21, 2018  |||

More in this category: « Emirates to operate first ever A380 to Beirut Air New Zealand reports $323m interim result, on track for second highest profit in company history »
back to top
Jun 04, 2018