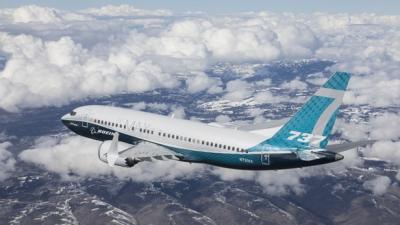 The third version of the 737 MAX, the MAX 7 is derived from the MAX 8, which entered service in 2017, and is the longest yet of the MAX family. According to Boeing, it's designed especially for operation from airports at high altitudes and hot climates and is intended to replace the Boeing 737-700 as well as compete with the Airbus A319neo.

The 737 MAX 7 has two more rows of seats than the MAX 8, allowing it to carrying up to 172 passengers. Its two LEAP-1B engines from CFM International give the aircraft the longest range of the MAX family at 3,850 nautical miles (4,390 mi, 7,130 km), plus an 18 percent fuel savings per seat compared to the 737-700. It boasts a redesigned undercarriage and wings with Advanced Technology winglets, a strengthened airframe, and the Boeing Sky Interior.

Boeing says that the 737 MAX 7 will now undergo a comprehensive flight test program for certification and delivery next year.  "The MAX 7 will provide airlines an efficient product for opening and flying thinner markets and accessing challenging airports, while enjoying all the benefits of being part of the 737 MAX family," says Randy Tinseth, vice president of Marketing, Boeing Commercial Airplanes.