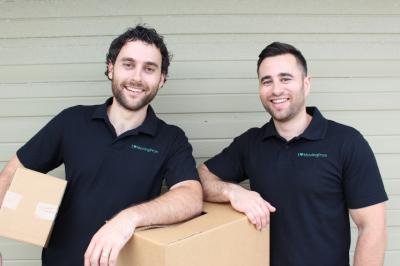 A Kiwi company taking the stress out of moving is about to make a move of its own by launching its new platform, dubbed the “Trivago for moving,” across the ditch.

MovingPros is a moving company comparison website that takes the stress out of finding a trusted mover. Customers can receive quotes from various moving companies, compare prices and reviews, and book online.

It launches in Australia today — letting the Aussies in on the Kiwi innovation created by founder-brothers Cam and Nate Whitaker.

Launched in 2016, the business has also been chosen from 106 applicants and accepted into Kōkiri - a first of its kind business accelerator dedicated to speeding up the development of ten early stage Māori businesses.

The four-month programme is created by Māori for Māori and is partnered with Te Wānanga o Aotearoa and Callaghan Innovation with support from leading brands including Spark, Air New Zealand, and Westpac.

Nate Whitaker said being chosen helped the brothers with their launch into Australia — a move which will help hundreds of thousands of consumers get the best value and most reliable moving service.

“When we began researching the biggest cities globally to potentially expand into we were surprised to find that Sydney came out on top in terms of the number of people searching for removal companies every month — even beating out some of the most populated cities like New York and London.

“The search data from Google shows the demand for moving companies in Sydney is four times that of Auckland — so we have a huge potential to help hundreds of thousands of Aussies take the stress out of moving house.

“People say moving house is one of the most stressful things you can do, but it doesn’t have to be. Our platform lets people get all their quotes in one place, as well as book a mover based on customer reviews — moving made simple, really.”

The brothers started MovingPros after their own less-than-satisfactory experiences moving house.

“After both having pretty shocking moving experiences, we wanted to solve the problems we had,” says Nate.

“Getting multiple quotes was time-consuming and cumbersome, wading through countless websites was overwhelming, and then having to submit the same information over and over again was frustrating and a huge time waster. Then, there was no objective way to verify if a company is trustworthy or not.”

The brothers manage the business remotely, Nate from Auckland and Cam from Tauranga, and say their move into Sydney is the first step of their global expansion strategy.

They have a network of over 150 movers across New Zealand and have helped more than 20,000 moving customers since their launch in September 2016. They aspire to create a billion-dollar business solving transport and shipping inefficiencies in the global residential moving industry.

More in this category: « NZ businesses remain pessimistic in first quarter as worries over govt persist: NZIER Auckland screen industry powers up »
back to top
Jun 02, 2018