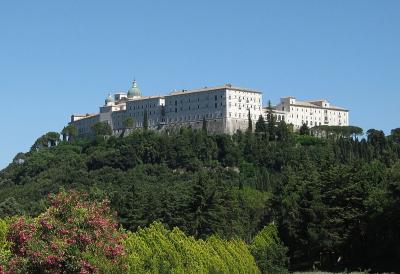 The Allies landed in Italy in September 1943, coinciding with an armistice made with the Italians who then re-entered the war on the Allied side. Allied objectives were to draw German troops from the Russian front and more particularly from France, where the Normandy offensive was planned for the following year. The Allies were to push northward on two fronts. On the Western front, the US 5th Army commanded by Lieutenant-General Mark W Clarke moved northward from Naples while the British 8th Army, including the 2nd New Zealand Division, commanded by General Sir Bernard Montgomery advanced up the Adriatic Coast. The invasion progressed rapidly through southern Italy despite stiff resistance, but, by the end of October, the Allies were facing the German winter defensive position known as the Gustav Line, which stretched from the Garigliano River in the west to the Sangro River in the east. The New Zealand Division’s first action in Italy was on the Adriatic coast where they crossed the Sangro River and advanced into the heavily defended hills of the eastern part of the Gustav Line. Steadily the German resistance increased until they checked the Kiwi’s in front of the small town of Orsogna. The incredibly difficult terrain, steep ravines, harsh winter and ubiquitous mud confounded all efforts, and lead to a demoralising setback for the New Zealand Division. On the western side, the German Army decided to hold their ground at the town of Cassino, in front of the Monastery. Hence, four battles for Montecassino raged from the 17th of January 1944 until the final occupation on May the 18th 1944. The capture of the Abby at Montecassino came at a very high price after much fighting and considerable losses on both sides. The Allies suffered 55,000 killed or wounded with German casualties said to be over 20,000. The role that New Zealand troops played was significant in the second and third battles for Montecassino, from the 1st of February to the 10th of April 1944 where the Kiwi casualties totalled 1,596 (343 killed, 1211 wounded and 42 taken prisoner). It is in recognition of this that we gather in Italy, May 2019, on a pilgrimage to commemorate the 75th Anniversary of the Battle of Montecassino.

Our pilgrimage starts in Rome, the capital city of Italy. Known as the Eternal City, Rome is built across seven hills and is one of the most important cities in the history of Western civilisation. If this is your first visit to Rome we highly recommend taking the opportunity to arrive early and explore. Many sightseeing and accommodation options are available from the team at Tempo Holidays. This evening we join with our fellow travellers at an informal gathering and presentation on the week ahead hosted by our historian.Dinner is not provided this evening however there are many restaurants within easy walking distance of the hotel.

Friday 17 May – Rome to Cassino via Anzio.

Leaving Rome after breakfast we head south to Anzio. The battle of Anzio began on January 22, 1944 with the landing of 36,000 American and British troops under the command of General John P Lucas. Lucas spent a week securing his beachhead instead of advancing against the unprepared German defences. On January 30 1944 Lucas decided to attack, the American Rangers assaulted Cisterna di Latina and the British troops Campo Leone. Both attacks were disastrous failures. During this time Kesselring, the German commander, rallied troops from throughout Italy and surrounded the Allied forces. The fierce German counter attacks in mid-February nearly succeed in crushing the beachhead. During the day, we visit the beaches and cemeteries of Anzio & Nettuno before having lunch at the Museum of Piana della Orme. This incredible Museum is unequalled and is a real surprise. We arrive into Cassino early in the evening. Cassino will become our base for the next 4 nights. Tonight, we have an informative presentation on the Battle of Montecassino before joining together for dinner at the hotel.

Local visits & Commonwealth Service Following breakfast, we drive from the hotel to the German Cemetery, the final resting place for over 20,000 German servicemen of the Italian campaign. It is an impressive location and very peaceful. We then travel to the Commonwealth War Cemetery where 4,266 soldiers lie including 500 Kiwis. Within the cemetery stands the Cassino Memorial which commemorates over 4,000 Commonwealth servicemen who took part in the Italian campaign and whose graves are not known. The cemetery is on the edge of town and looks up to the rebuilt Monastery that took so many of their lives. Returning into the township of Cassino we stop for a guided tour of the Cassino Museum before walking a short a distance to the Cassino Railway Station. During the second battle, the Maori Battalion attacked the Cassino railway station on the nights of 17 & 18 February 1944, but when supporting tanks were unable to get through they were forced to withdraw under heavy fire. A and B Companies suffered terrible losses, with 128 of the 200 men killed, wounded or captured. The third major battle in March saw the New Zealanders finally capture the railway station and the town of Cassino but were eventually unsuccessful in breaking through. Exhausted, they were withdrawn in early April and the Abby eventually fell to the Polish on the 18th of May 1944. There is time to find a place for lunch before returning to the Commonwealth Cemetery in the afternoon where a combined Commonwealth 75th Anniversary Commemorative Service is planned. The evening is free to relax at the hotel or walk the 20 minutes into Cassino Township to explore on your own.

NZ & 28th Maori Battalion Commemorative Services. Today we attend two uniquely New Zealand services. In the morning, we return to the Commonwealth War Cemetery to gather with fellow pilgrims and dignitaries for the official New Zealand commemorations. This is followed in the afternoon by another very Kiwi service held at the Cassino Railway Station. The evening is free to relax at the hotel or walk the 20 minutes into Cassino Township and explore on your own.

This morning we drive up the winding road to the Monastery itself for a comprehensive tour. The Montecassino Monastery was founded by St Benedict around 529AD. Over the centuries it has been destroyed and rebuilt 3 times. In February 1944, and in only three hours, it was destroyed under a hail of bombs and shells from the Allies. Many defenceless civilians seeking refuge in the monastery met their deaths in the bombing raids. The bombing of the monastery was very controversial at the time and it still is. It is questionable whether destroying the Abby helped or hindered the Allied cause. This is something we will no doubt debate. On our return, we visit the Polish Cemetery that contains the remains of over 1,000 Polish troops, including their famous leader General Władysław Anders, who at his own request, was buried there in 1970. If access is available, you may choose to visit the Polish Tank Memorial, Albaneta Farm and the Memorial on Hill 593. Albaneta Farm was an ancient farm complex below Hill 593 and a ‘back-door’ route to the monastery of Montecassino. It was the scene of heavy fighting on 19th of March 1944 when the 20th Armoured Regiment of the New Zealand Forces pushed up through Cavendish Road to launch an armoured thrust which would outflank the German positions. Many New Zealand tanks were knocked out; after the war one Polish tank was left as a memorial and remains where it stopped on the Cassino battlefield. Cavendish Road was built by the Kiwis under the noses of the Germans and today is largely overgrown and inaccessible. In the afternoon, we drive away from Cassino to San Pietro Infine where we stop for lunch. During their approach to the Gustav line at Montecassino, the US 36th Texan Division and German troops battled in and around San Pietro Infine for nine days in December 1943. The Allies forced the Germans to retreat achieving their goal of an advanced position from where to attack Cassino. The village was reduced to rubble and has been left untouched as a reminder of the horrors of war. We take the time to wander through the village before visiting the Italian Cemetery returning to Cassino in the late afternoon.

Tuesday 21 May – Cassino to Ortona.

After breakfast, we say farewell to Cassino and drive eastward to the Italian Adriatic Coast following in reverse the route that the Kiwis would have marched 75 years before. This region saw considerable action as the Eighth Army advanced up the coast late in 1943. Just south of Ortona is the Sangro River Cemetery where 2,617 Commonwealth soldiers are buried; 355 are from New Zealand. We also pay our respects at the Moro River Canadian Cemetery. By the middle of December 1943, Canadian troops at the front of the Eighth Army reached Ortona and clashed heavily with the Germans on the outskirts of the city with many casualties. Eventually the Canadians won and their losses are witnessed at the Moro River Canadian Cemetery where 1,615 lie at rest. Also planned is a visit to the Museum of the Battle of Ortona. An afternoon arrival into our beach front hotel is planned, where dinner is included after a historical presentation on the next day’s activities.

Wednesday 22 May – Ortona to Rome via the Battlefields of Castelfrantano and Orsogna.

Leaving Ortona we drive west into the foothills of the Apennines. The Battles for Castelfrantano and Orsogna were significant in the writing of New Zealand’s Military history. Orsogna, in particular, was to be a major check in the reputation of the NZ Division and signs of disquiet became evident after bitter fighting and awful losses. We travel over narrow winding roads and pass through small villages which saw the brunt of the military action. Little evidence is visible today but the terrain remains unmistakeable. Stopping for lunch in Orsogna we have time for discovery and no doubt to interact with the locals who remember the kiwis well. When we have finished we continue across the Apennines back to Rome, arriving in time for a farewell dinner a time of reflection.

Thursday 23 May – Farewell After breakfast, the formal part of the pilgrimage ends and we wish everyone a safe onward journey.

The Price Does Not Include: • Flights to and from Italy • Drinks and meals not mentioned in the itinerary • Items of a personal nature • Travel Insurance (compulsory) • Personal tips to local drivers and staff

How To Book: A deposit of $500 per person is required at the time of booking. This deposit is non-refundable and is part of payment of the balance. Full payment is due by 31 January 2019 . Places on the pilgrimage are limited and we encourage you to book early.

Important Information: This itinerary is based on information available as at 01 August 2017. The order of events is subject to change up to and including the departure date. Every effort will be made to inform group members of changes as they occur. Prices are subject to change due to currency fluctuations or unforeseen circumstances. Prices are based on exchange rates existing as at 1/8/2017.

Conditions: * It is our policy to present the cost of our flights & holidays inclusive of all airport and government charges. Please accept however that these charges are not within our control, therefore we reserve the right to pass on any increase. Travel agent professional service fees where charged, will be additional to the advertised prices.

More in this category: « World’s biggest plane set to fly in coming months Waterways of the Tsars ex Moscow »
back to top
Apr 05, 2018