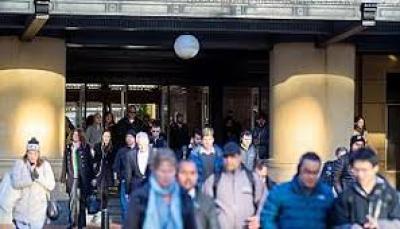 The review of New Zealand’s security and intelligence agencies began in June and will be completed by the end of February 2016. What is going on in this sphere, and who is causing it to happen? MSCNewswire sheds helpful light on the services through the eyes of those who work for them, or those who anticipate working for them.

Security and Intelligence Agencies Review: an Operational Glimpse MSCNewsWire- Aug 18 2015 - You operate in the shadows and this is where you must stay. Most of you will quite literally be in the dark, clinging to chat room walls, drilling down into dodgy sites, especially the ones that have an outwardly innocent appearance, and de-ciphering the real intention beneath the apparent one.

Boring, painstaking yet requiring incessant alertness because in your vocation few things are what they seem. The purest of intentions in one set of eyes, in this case the perpetrators, so often represent diabolical outcomes for your protectorate.

In signals security intelligence you must be two quite different things. You must be what was once described as a boffin, a nerd as we would now describe it. You must also have an artist’s appreciation of the shaded variant and a policeman’s intuition about something or someone not being as it or they should be.

Chance messages, the ones out of the usual family and friends traffic, will be to you of especial interest.

What about the human side of the services, the one that gets the most public display and thus attention? At any given time here you and your colleagues will have under surveillance around 100 persons of interest.

But what type of person should you be? Ideally you should be at heart much the same as your signals interception colleagues. A mixture of the nerd and the curious. Your eye should constantly be on the look out for non-standard behaviour, or evidence of it.

You will be well paid, and so living in the more genteel suburbs. Let us say now that you visit for example your local supermarket and see there on the community noticeboard among church and Rotary communiques a message from this or that friendship group of the more zealous category soliciting interest from locals.

What do you do? In your case, you start by being suspicious.

Fashionable people with their access to the mainstream media want you to feel guilty. To make you believe that you are focussed on the poor and the disadvantaged. Those, as they see them, who are merely seeking to strike back at their oppressors.

You will know though that the present extremist danger also has solid roots in the ideologically-prone middle class.

You understand that in today’s era of re-tribalisation that New Zealand’s determined and manifest secularism is in itself a challenge to religious resurgence.

From a management point of view you are in the business of exception control, looking for departures from the norm.You are particularly attentive therefore in regard to those who have recently become religious converts or start to demonstrate an unusual degree of fervour or even just activity in the sphere.

If someone under your purview who has hitherto been a wowser suddenly develops an interest in clubbing and the frivolities of life, and vice-versa, then this becomes a signal to you.

In the main, your catchment will be those in the 15-25 years of age group range Yet you will also be highly focussed on those of all ages involved with their support groups and it is here that your hand must be most sure.

This is because so often these are exactly the category of people who receive unqualified support from the intensely vocal political classes.

Anecdotal evidence is central to your craft. Rumour, hearsay, gossip and innuendo are all your raw material.

On the one hand on the signals side there is the requirement for infinite technical precision. In the field, meanwhile, there is operationally the demand for having a nose for unverified yet relevant human data.

Here now is such an example. Immediately after 9/11 there was emanating from the Canterbury area talk about a group of male foreigners who had been training to become pilots.

Nothing unusual in this. Except that immediately after the World Trade Centre attack the entire group of trainee pilots abruptly quit New Zealand.

All rather academic now of course. Except for one thing. If this rumour has any basis at all then several question needs to be asked in relation to the existence or otherwise of a support group, and the composition of any such support group. Is it still there?

Now comes though, one of the most important issues of all. What type of person do you need to be to do this type of work?

You need to be the perfect public servant and of the traditional reticent type, rather than of the more modern show pony variety. It is said that in regard to secrets the world is divided into only three types.

There are the ones who tell their friends, the ones who do not, and the ones who forget what the secret was in the first place. No guesses about the category you must belong to.

Here now is the really important one. How do you get the job in the first place?

A requirement is that you can describe exactly where you were, and what you were doing in your life up to that point. There can be no cv black holes explained away by claiming for instance that for several uncharted years you were on your OE and wandering around Europe and the Middle East.

Must you have a university degree? Ideally. But not definitely. In no other area of the public service is there quite the same level of risk in engaging the over-qualified.

The over-qualified and under-engaged practitioner is exactly the type who tends to take their dissatisfaction public. Recruiters are on the look-out for candidates who show signs of neediness in terms of requiring recognition over and beyond that which a public service career might reasonably bestow upon them.

In the event you successfully navigate through the selection sieve. Now what should you expect? Bearing in mind that during the induction process you will have been taught not to expect too much from your new vocation. Not at the outset, anyway.

Sensibly you should become a spectator on your own career because nobody outside will know or should know,what precisely you do for a living, other than the fact that you are in the public sector. Sensibly, you will describe yourself as an analyst, which is of course what you are.

As a career officer you will have to learn especially to absorb criticism of the group variety which will come from two sources.

There will be external criticism which will come from the media, and especially the broadcast media.

This will focus on everything that has conceivably gone wrong or might go wrong. It will follow the theme of your departmental intrusion on the civil rights of an individual or a collectivity of them. There will be no mention in all this that you are in the business of saving lives.

Then there will be the internal criticism. It will come from actual or aspiring politicians. Most hurtfully of all it will also come from your fellow public servants in the course of one of their constant reviews scheduled or ad hoc on what you as an organisation are doing/should be doing.

Only very recently one such review carried the accusation of the security services being “over-siloed.”

Edward Snowden proved the extreme vulnerability to any such service that failed to have watertight doors between its activities.

Such are some of the thrills and spills of the service.

Now though you are operational. You are watching. You are being watched.

More in this category: « Winston Peters: New High Commissioner to Barbados announced Minister of Foreign Affairs to visit China »
back to top
Apr 17, 2018