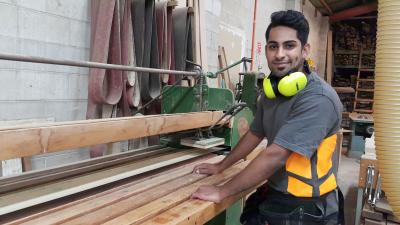 An outstanding achiever at EIT’s English Language Centre, Asaad was overjoyed recently to be offered a joinery apprenticeship with Christie Builders Joiners in Napier.

Once the 22-year-old has served his time, he intends taking up the company’s offer of a building apprenticeship, gaining experience that will lay the ground for his longer-term goal to qualify as an architect.

Asaad’s family are originally from Basra, which has seen some of the heaviest fighting since the 2003 invasion of Iraq. He, however, was born in Iran, his family having moved there to escape the conflicts that continue to assail their homeland.

Growing up in Iran, Asaad never felt it was his home. As a stateless person, life was very hard and, with no passport, he attended school illegally.

“There were many obstacles to everyday life,” he recalls.

Asaad is the youngest in a family of 10, most of whom are married and settled in the Middle East.

His father owned a joinery shop in Basra and taught his sons the trade. But as life became increasingly unsettled, he supported his family by working as a seaman.

His experience of the wider world led to his successful application for refugee status in New Zealand and for the next seven years his wife and three youngest sons endeavoured to join him.

While Asaad and his two brothers have achieved their “dream”, reuniting with their father in Napier, their mother remains in Iran.

“It was like a nightmare leaving Mum,” says Asaad, who is very close to his mother. “I hope she will be able to join us in this country.”

Arriving in New Zealand on a temporary passport, Asaad immediately felt that this country was his home. Having researched New Zealand, the only thing that really surprised him was our unarmed police officers.

“Everywhere else in the world they are armed,” he points out. “New Zealand is so safe and everyone is friendly. Everyone wants to help, especially my tutors at EIT.”

The three brothers enrolled in EIT’s English Language Centre, starting at level 1. While the older two went on to secure jobs and left ahead of Asaad, he persevered, working his way up to level 4 in the last semester of 2017.

“He passed every NZCEL level, the first student to do that at EIT since the qualifications launch in 2014,” says ESOL (English as a second language) tutor Vicki Fox.

“He was a very popular student with everyone, staff and students. He is unfailingly polite and gracious and his final speech moved most teachers to tears.”

After leaving school, Asaad worked as a joiner in Iran and his experience in the trade is proving an asset to his employer.

He enjoys living in Napier, has applied for permanent residency and hopes to apply for citizenship in a couple of years.

“One day I would love to travel,” he says. “I’ve been almost everywhere in the North Island and want to take a week or two now to explore the South Island. I’m told it is so beautiful.”

In his spare time, Asaad plays football, works out at the gym and, he adds with a smile, “I also like to watch rugby.”

More in this category: « Apprentice of the Year sector winners named New Wintec Council appointment and changes »
back to top
Aug 03, 2018