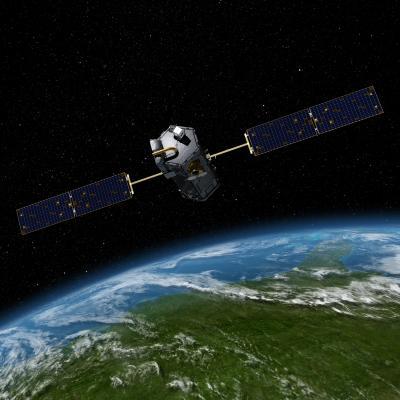 Artist rendering of OCO-2 Observatory used in the UNH research that measured the plant "glow ", or solar-induced fluorescence (SIF), produced during photosynthesis from different areas around the globe. Credit: NASA/JPL-Caltech

DURHAM, N.H. - It doesn't matter if it's a forest, a soybean field, or a prairie, all plants take up carbon dioxide during photosynthesis - the process where they use sunlight to convert water and carbon dioxide into food.

During this changeover, the plants emit an energy "glow" that is not visible to the human eye, but can be detected by satellites in space. Now, researchers at the University of New Hampshire have taken that one step further. By using satellite data from different major land-based ecosystems around the globe, they have found that the photosynthesis glow is the same across all vegetation, no matter the location. This first-of-its-kind global analysis could have significance in providing more accurate data for scientists working to model carbon cycle and eventually help better project climate change.

"The importance of these results is that rather than look at several different types of data and computer-based models from information collected on the ground to monitor plant photosynthesis across the globe, using the satellite observations will provide a near real-time option that is simple, reliable and fast," said Jingfeng Xiao, a UNH research associate professor and the principal investigator on the study recently published in the journal Global Change Biology.

Plants across the globe are a major carbon sink helping to remove carbon from the atmosphere during photosynthesis. Because of this, accurate photosynthesis estimates are crucial for scientists who examine ecosystem functions, carbon cycling, and feedbacks to the climate. The challenge has been in the ground-based data scientists previously used to estimate it, including air temperature, solar radiation, precipitation, and other information used in computer-based Earth systems models that focus on the carbon cycle. However, those calculations have large variations that can affect results.

To measure the amount of carbon taken up by plants through photosynthesis, known as gross primary productivity (GPP), scientists have increasingly been measuring the energy glow of plants, called solar-induced fluorescence (SIF). This light that is emitted through the leaf is found at the high end of the light spectrum. While scientists have used this data for specific biomes, or distinct biological communities like a forest or a desert, this study is the first to look at the relationship between ground-based GPP and satellite-observed SIF in different areas across the globe - from grasslands to mixed forests and even areas with sparse vegetation.

Researchers collected the SIF data for plants in eight major biomes, or ecosystem types, from the Orbiting Carbon Observatory-2 (OCO-2) satellite and found that it didn't matter where the plants were, that just like earlier studies in single areas, where there was more SIF, the plants took up more carbon from photosynthesis, and vice versa. Xiao's research establishes this universal relationship across eight major ecosystem types and shows that SIF can indeed serve as a proxy for more time-intensive calculations.

"This is a big step towards being able to solely rely on satellite measurements," said Xiao. "Because it is a very simple model it could help reduce uncertainty in the data, lower computational costs and help better project climate change."

This is the first time the OCO-2 has been used in a global analysis based on SIF observations. In addition, the direct universal relationship revealed in this study allows the estimation of photosynthesis without knowing the ecosystem type. This is especially important for areas of the globe where the satellite might not have reliable, fine-scale data on the vegetation type. Xiao is currently working on developing global SIF estimates for areas ranging on the scale of a few to tens of square kilometers, which he says will be useful for the scientific community studying these topics.

The University of New Hampshire is a flagship research university that inspires innovation and transforms lives in our state, nation and world. More than 16,000 students from all 50 states and 71 countries engage with an award-winning faculty in top ranked programs in business, engineering, law, liberal arts and the sciences across more than 200 programs of study. UNH's research portfolio includes partnerships with NASA, NOAA, NSF and NIH, receiving more than $100 million in competitive external funding every year to further explore and define the frontiers of land, sea and space.