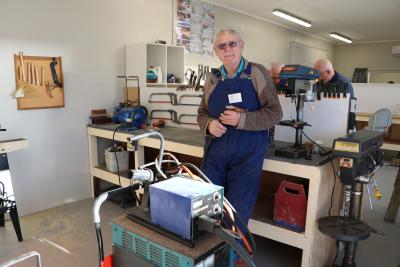 Sid Lockhart, a qualified engineer, is delighted with the donated welding gear from Ara.

Ara’s gain is the Menzshed’s gain in Timaru as the tertiary institute donates welders to the community organisation to make way for almost $77,000 worth of new state-of-the-art engineering trades equipment at the Timaru campus.

The donated equipment, an arc welder and a MIG welder, was gratefully received by the non-profit group.

John Cook, Secretary Timaru Community Menzshed Incorporated, expressed his sincere thanks for the Institute's “very generous donation”. Menzshed members will make good use of the equipment, he said. The donation is particularly timely as the group founders prepare a new workshop facility and to open Menzshed to a wider membership. “The ethos of Menzshed is to give a focal point to people, mainly men, who are at a stage in their lives, often following retirement, redundancy, bereavement or other similar life changing events which often leaves them isolated and feeling worthless,” Cook says. “Menzshed gives people the chance to remain active and healthy, to continue using their skills, to learn new ones and to help others while carrying out projects that benefit both themselves and the community.” “This equipment will be used by our members to fabricate items requested by local community groups. Work will be directed by skilled welders who will guide and train other members who do not have welding skills themselves but would like to learn. Metal work is only one area of interest to our members; we are making provision for woodwork, general carpentry, hobbies, computer skills and even cookery.”

Ara students are also delighted, with the new equipment installed in the Timaru campus workshop. Seven new Lorch welding machines from Germany (worth $44,000) join a guillotine, rolls and folder fabrication tools, and three new plasma cutters, installed in the last six months, ensuring that Ara is at the top of the game in welding, fabrication and machining trades.

“Technology has moved on over years and the new welders are state-of-the-art, digital and programmable for both basic and highly specific work,” engineering trades tutor Wayne Anderson says. “Ara is amongst the first in Christchurch and Timaru to be using Lorch equipment, which was provided by Weldworks. We are really proud of the experience this gives our students here at Ara, which complements their weekly workplace training in the industry.”

Students working towards the NZ Certificate in Mechanical Engineering Level 3 programme have started using the new equipment. “The new welders do three different welding processes – MIG welding, arc welding, TIG welding. We are using them in manual mode and synergic mode, which means you select the metal type, thickness and wire diameter and the welder decides what the amps and volts are. This is the new generation of welding equipment.”

More in this category: « The Waikato region’s economic development agency launches Bringing government back to the people: LGNZ and The New Zealand Initiative start ‘Project Localism’ »
back to top
May 17, 2018