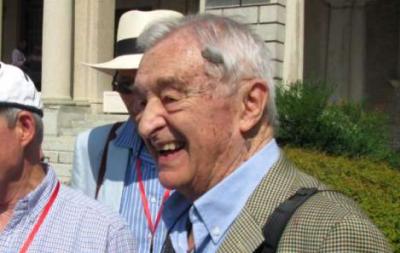 Fontanellato is a town in the Emilia- Romagna area about 15 kilometres from Parma. We were there in order to celebrate the events that occurred there at the time of the Italian Armistice in September 1943, when the Italy switched from the Axis to the Allied side and the 600 or so POWs held in Campo P.G. 49 in Fontanellato escaped en masse .

The visit programme was organised by Fontanellato authorities led by Mayor Francesco Trivelloni and from Friday 7th to Sunday 9th September 2018 a group of 90 visitors descended on the town.

On the British side, the preparations and execution of the programme were flawlessly managed by the committee of the Monte San Martino Trust (MSMT), led by its President, Sir Nicholas Young, and very ably supported by John Simkins and Christine English, all of whom were the children of POWs in Italy.

Monte San Martino Trust was founded in 1989 by one of the escapers, Keith Killby, with the aim of ensuring that the bravery and generosity of the many Italians who had risked their lives to help these Allied servicemen, whether escapers or evaders, was not forgotten.

Local fascist collaborators offered large rewards for escapers and for those who dared to help them. Those Italian helpers who were arrested routinely faced torture and execution or deportation to concentration camps in Germany, where large numbers of them perished.

Each year MSMT issues bursaries to the grandchildren of those who helped the escapees. The recipients visit England to study English. In 2018 a total of 39 Italian students, aged 18- 25, will have taken advantage of these bursary opportunities.

The majority of our party to Fontanellato were the children, grandchildren and other relatives of the Allied POWs who had been held in the town.

Also represented represented was the Escape Lines Memorial Society and a delegation from the Wells, Somerset, town twinning committee

Amazingly, one POW escaper, the 98- year old Frank Unwin, also joined the group, along with his son and daughter- in – law.

Frank had served in the Royal Artillery and was a prisoner in Campo P.G. 82 in Laterina and then in Stalag XIA near Altengrabow.

Most of the group had come from the United Kingdom, but other visitors had traveled from Canada, New Zealand, South Africa and Seattle in the United States.

Several Kiwis had even traveled their escaping relative’s journey in reverse, covering some 800 kms on mountain bikes from where they had crossed the Allied front line back to the POW camp in Fontanellato.

The town’s extraordinary hospitality started with a supper in a community hall, where delicious Parma ham, salami, local cheese, bread and desserts were served and were washed down with generous quantities of local wine.

This was a pattern that was repeated on numerous occasions over the next 48 hours. During the welcoming speeches everyone present was invited to send a very loud ‘Three Cheers’ via the magic of the mobile telephone to Keith Killby, the MSMT’s 102 - year old founder, who had been unable to travel to Italy with us.

After the supper we all moved on to Fontanellato’s 18th century town theatre, where for about 90 minutes we were entertained by a soprano and a tenor, accompanied by an excellent brass quintet, as they spoiled us with extracts from Aida, Traviata, Il Trovatore and other operatic gems.

The evening was pleasantly warm and so through the open side windows of the theatre wafted the sounds of the town’s nightlife, reminding us that this cultural experience was closely connected with everyday life in Italy and was not just for an elite audience.

As the concert came to an end amid a clamour for encores, the MSMT President, Nick Young, suddenly appeared on stage and passed on the very sad news that Keith Killby, our founder, had died earlier that same evening.

Apparently the recording of our ‘Three Cheers’ had been played to him with which he had decided to let go. Misty - eyed we all stood to pay our respects as the trumpeter played three ‘G’ notes, which had been the signal given on 9th September 1943 for the Fontanellato POWs to break out of the camp and begin their escaping journeys.​

The final event of the programme was an informal light lunch held in the shade behind the Cardinal Ferrari Centre, site of the camp, in the area used by the POWs for sports. There the Mayor and his principal assistant were given gifts in thanks for the overwhelmingly generous welcome that Fontanellato had extended to its MSMT, Escape Lines Memorial Society, and Wells twinning guests.

Also present at the ceremony and lunch at the Cardinal Ferrari Centre was a most remarkable character, the 94- year old former partisan and escape lines operator, Signor Francesco Gnecchi- Ruscone (pictured above) , accompanied by his daughter, Alessandra.

A multi - lingual retired architect, he recalled with extraordinary clarity his time aiding Allied servicemen, his arrest, torture and imprisonment by the Germans and his unexpected release from captivity in March 1945.

Even more extraordinary than his partisan exploits from my point of view was his unexpected reference to a family coincidence that emerged while my brother- in - law, James Anderson, and I were talking to him.

A reference to Cornwall, the county, immediately caused him to declare that he knew Cornwall, with which he reached into his briefcase and produced an A4 ring- binder. “I am writing a book of sorts to keep my mind active”, he declared, “In fact, here is an image of a water colour that I painted in Cornwall about 15 or so years ago”.

The picture showed sheep grazing on a moorland pasture.

“So, where did you paint it?” I asked. “Cabilla Manor” was his immediate response. “But that’s my twin sister’s house!” I said, with which he turned to the next page in his file in which he had described in Italian how he had indeed stayed at Cabilla with Robin and Louella Hanbury- Tenison.

It is indeed a very small world and, as my father often said: “The world is full of coincidences, but if you don’t talk to people you’ll never find them”.

Having been amazed that Francesco Gnecchi- Ruscone had stayed with my sister and brother- in - law at Cabilla, I contacted Louella to see if she recalled his visit.

She replied that not only did she remember Francesco’ s time with them in August 2005 , but that a picture that he gave her still hangs in the dining room at Cabilla.

The commemorative events in Fontanellato on the Sunday had proved to be the perfect ending to a most memorable and joyful weekend in the company of so many delightful people, so many of whom shared the privilege of being connected to former POWs in Italy in the Second World War and whose support for the aims of the Monte San Martino Trust has been further strengthened by this wonderful experience.​