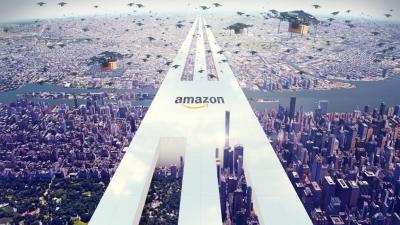 Will it help New York grow, as the state’s governor Andrew Cuomo seems to believe? Or will it place more stress on an already strained and aging subway system, and exacerbate the city’s housing inequality?

As New York readies itself for the arrival of Jeff Bezos’s personal helipad, Fast Company asked the New York-based Architecture Research Office (ARO)–the American Institute of Architects’ New York State firm of the year– to imagine what Bezos’s New York will look like. Their answer? A city turned into a giant fulfillment center.

One of ARO’s two concepts shows a huge white building emblazoned with the Amazon logo. The building stretches from Manhattan into Queens and then so far into the distance that it disappears over the horizon. It’s a never-ending fulfillment center that the architects dub “Continuous Fulfillment.” According to ARO principals Adam Yarinsky and Stephen Cassell, the idea is an homage to a 1969 concept from the Italian radical architecture firm Superstudio called “The Continuous Monument.” The idea posits that technology will render the built environment uniform, turning buildings into white monoliths. In the air above Amazon’s never-ending warehouse, swarms of drones hover ominously–a startling vision of Amazon’s quest to develop delivery drones.

More in this category: « Architectural drawings declared a national heritage treasure
back to top
May 14, 2018