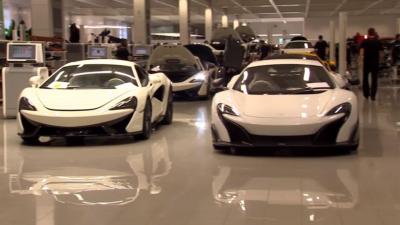 SkyNews reports that The McLaren group's sports car arm will repatriate production and development of its chassis in a move creating at least 200 jobs.

McClaren has agreed a £50m deal to build a new production and research facility for its carbon fibre sports car chassis in the UK.

McLaren Automotive, a sister firm of the wider group which includes the Formula One racing team, is bringing the work back to the country from overseas in a move creating 200 jobs.

The roles would comprise mainly production staff, with 50 support workers.

The factory is to be housed next to the University of Sheffield's Advanced Manufacturing Research Centre (AMRC) under a partnership arrangement, which includes a training programme for McLaren apprentices.

Full production is due to be reached by 2020.

Mike Flewitt, McLaren Automotive's chief executive, said: "In 1981, McLaren was the first company to recognise the exceptional properties of carbon fibre, and we have designed the highly technical material to be at the heart of every McLaren road and racing car ever since.

"The now-iconic McLaren F1 was the world's first road car to be built with a carbon fibre chassis and every car built more recently by McLaren Automotive has the same.

"Creating a facility where we can manufacture our own carbon fibre chassis structures is therefore a logical next step."

He added: "At the AMRC, we will have access to some of the world's finest composites and materials research capabilities, and I look forward to building a world-class facility and talented team at the new McLaren Composites Technology Centre."

More in this category: « 2018 Holden Commodore Sportwagon revealed Petrol prices are a rort »
back to top
Sep 19, 2018

Internet of Manufacturing Study Tour - What can we learn from the USA?

Australasian manufacturing is going to be great again