Getting around town has never been greener or easier for Cantabrians 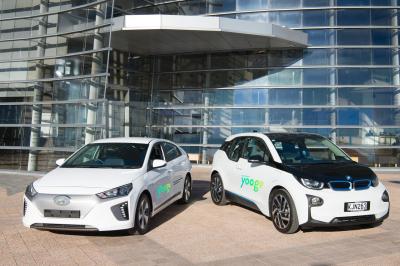 The largest transition of combustion engines to pure electric shared vehicles in the Southern Hemisphere is set to get underway in Christchurch from November.

Canterbury organisations and residents will soon have access to a pool of 100 pure electric vehicles, only one of a few cities internationally to offer a 100 percent electric-powered car share service.

Yoogo has been leading the way in its use of GPS data to monitor the efficiency of its fleet. This led the company to strategically develop a car-sharing model that also demonstrates its commitment to electric vehicles. As a result, the company is rebranding to reflect its two core business streams: Yoogo Fleet, which will maintain the business’ focus on fleet management and leasing; and, future focussed Yoogo, which is committed to growing the pure electric car-sharing market. The aim of both brands is to optimise New Zealand’s fleet.

“The pure electric car-sharing platform is a smart and sustainable way to get around town for businesses and everyday Kiwis,” says Ms Corson. “Yoogo will deliver an experience that is easy, enjoyable and affordable. Cantabrians will pay for the time they use the car and Yoogo takes care of everything else. Users can simply book online and access vehicles via the Yoogo app or swipe card.”

In partnership with Council and its commitment to carbon emission reduction, this initiative is the result of both leading public and private sector organisations partnering over a shared vision for an efficient and sustainable transport solution.

The service will be available for Council, Ara Institute, Aurecon, Beca, Canterbury District Health Board, Chapman Tripp, Environment Canterbury, Meridian Energy, Tonkin and Taylor, Warren and Mahoney, and, Christchurch Airport, as well as for the general public.

Yoogo will initially launch 70 electric vehicles across three city hubs in late November with 30 additional vehicles to follow in February 2018 across ten locations in total.

Kevin Crutchley, Council’s Resource Efficiency Manager and project manager for this city-wide scheme, says “This new, innovative, 100 per cent battery electric transport service is an exciting development for Christchurch. New Zealand’s electricity is mostly generated from renewable energy so this electric vehicle offering will reduce our city’s carbon emissions. Also using a transport service with zero tail pipe emissions will improve air quality and have positive health benefits for the residents of Christchurch.”

Yoogo will open hubs at Christchurch Airport, West End and Art Gallery using an A to A model. All the other hubs will be open by the end of March and next year Yoogo will move to an A to B model which means a vehicle can be dropped off at a different Yoogo hub.

The initial hubs around the city will include the West End, Lichfield Street, The Crossing and Art Gallery car parks, Ara Institute, Canterbury University, Papanui and Fendalton Libraries, Lyttelton Community Centre and Christchurch Airport. Pure electric vehicles at these hubs will include Hyundai Ioniq and BMWi3 vehicles.