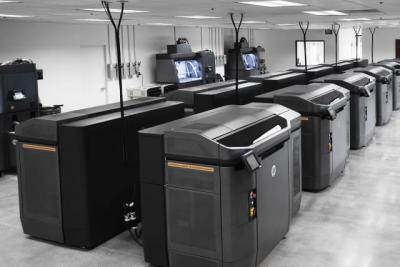 14 Nov 2017  -  Michael Molitch-Hou posted on engineering.com an article on HP’s Multi Jet Fusion (MJF) 3D printing technology.  He writes that this technologythat  has been one of the most exciting to watch, not just in terms of what it is capable of now, but what it portends for the future— a future that includes embedded electronics, augmented reality, ceramics and even metal.  Laying out the road to that future, HP announced both the release of a new MJF printer, ahead of formnext, and, this past October, plans to embark on metal additive manufacturing (AM). Along with the new Jet Fusion 3D 4210 system, HP has also announced, as a part of its Open Materials Platform, an expanded materials portfolio and additional partners.

The 4210 takes these improvements further and, according to HP, “rais[es] the ‘break-even point’ for large-scale 3D manufacturing to up to 110,000 parts.” This means that producing up to 110,000 items on the system matches the costs of traditional mass manufacturing methods. Based on the company’s internal testing, parts can be mass produced at 65 percent of the cost of other AM technologies, such as fused deposition modeling and selective laser sintering (SLS).

The increased productivity is the result of hardware and firmware upgrades made to the existing Jet Fusion systems, which make it possible to perform continuous operation. This includes a new processing station for handling higher material volumes. Preorders for the machine, including upgrades for existing Jet Fusion customers, are available now.

HP has a unique approach to its materials for MJF, allowing partners to develop proprietary materials on MJF systems to be sold through HP’s distribution network. As a part of the Open Materials Platform, it’s also possible to work with what the company dubs a Material Development Kit (MDK), which gives customers access to specific parts of the MJF process at various stages of printing, beginning with powder distribution.

Up to now, the materials were somewhat limited to a couple of varieties of black nylon powder. This material set has expanded with the latest news from HP, adding several materials that bring MJF closer in line with the technology’s number one competitor, SLS.

HP Aims for Metal AM

At the HP Securities Analyst Meeting 2017 in Palo Alto in October, the company also announced that it was planning to enter the metal AM market, something I’d hypothesized since the launch of MJF at RAPID 2016.

President of 3D Printing at HP, Stephen Nigro, relayed at the event, “We have developed a novel 3D metal approach that is built to run a combination of high quality and improved economics [for] 3D-printed metals. Today’s 3D metal industry is focused primarily on specialized, high value, expensive applications. Our invention will transform the 3D metal into a more mainstream, high-volume production.”

The MJF platform had already been modified so that it could produce ceramic components, which likely involves binding the ceramic powder together before this completed green part is sintered in an oven. Metal, then, would require a similar approach, with the ceramic swapped out for metal.

This Metal Injection Molding-style technique has already been implemented with Desktop Metal’s technology, possibly putting the startup in direct competition with HP. We’ll know more next year when HP will officially announce the platform and its business plan for metal AM.

Also at the event, Nigro said that HP will be releasing its full-color MJF platform next year. This will give MJF a serious leg up on SLS, which requires either dying printed parts or printing in monocolor plastics. Combined with the productivity of MJF, full-color 3D printing will make it possible for the technology to compete with injection molding even further.

“MJF will be the one and only 3D printing technology in the industry that can make mechanical and robust functional full-color parts,” Nigro explained.“We plan to combine this color capability with a new, lower price position. The lower price position will open up new markets to HP, making it easier for designers and creators to access the technology. Being able to prototype with the same technology as full-scale production, which will change the end-to-end design process and accelerate the adoption of 3D printing.”

In an industry filled with hype, I’m reluctant to say that both of these announcements may have a profound impact on how the 3D printing industry evolves and may shake up the $12 trillion manufacturing industry, as HP claims it will.