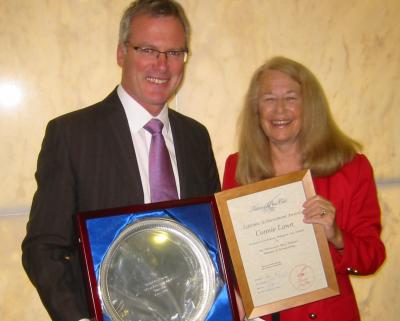 Miss Lawn is photographed in The Beehive in 2006 receiving her National Press Club Lifetime Achievement Award from Minister of Broadcasting Steve Maharey.

The death at 73 of Connie Lawn evokes for many the epoch in which Radio New Zealand set the news agenda throughout Oceania.

Miss Lawn broadcasting from Washington became the best known of an international group of correspondents then featuring regularly on the news hours.

Miss Lawn’s renown centred on her Washington reports to Radio New Zealand’s morning segment prior to the start of the working day which in this era was required listening for what would now be described as the political class.

Her era in this role was encapsulated in her autobiographical work You Wake Me Each Morning which went through several editions.

Based on this experience Miss Lawn who died on April 2 after a long illness, Parkinson’s, became an unofficial consul in Washington shepherding itinerant New Zealanders in their desired direction.

She was in her later years the Dean of the White House Press Corps, having served there for half a century.

Connie Lawn brought a luminous element to her foreign correspondent role thus presaging in a curious way the current RNZ scheme to recover its pre-eminence by grafting onto itself a television channel.

For most of her career she was freelance having incorporated herself as Audio Video News which was to achieve an international clientele.

She is survived by her husband Dr Charles Sneiderman and her two sons David and Daniel.

Miss Lawn is photographed in The Beehive in 2006 receiving her National Press Club Lifetime Achievement Award from Minister of Broadcasting Steve Maharey.