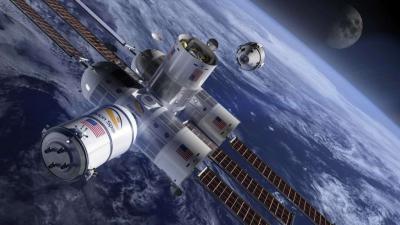 Rendering of the Aurora Station. This could be the first hotel in outer space, and it's being built by Orion Span, a space technology company based in Houston and Silicon Valley.

The luxurious Aurora Station is the brainchild of Orion Span, a space technology company based in Houston and Silicon Valley. The low-Earth-orbit hotel would be manufactured in the Clear Lake area, capitalizing on local expertise in human spaceflight. Tourists would train for their trip here as well.

“Houston is by far the best place in the world for human spaceflight and human spaceflight development,” Orion Span CEO Frank Bunger said in a telephone interview after the Space 2.0 Summit in San Jose, Calif.While the pricetag for the 12-day journey may sound beyond the reach of most Houstonians, Bunger said it’s more affordable than previous space tourism experiences. And he aims to bring the price down further.

“We want to make space accessible to regular individuals on average incomes,” he said.

Bunger declined to say whether he picked up any trip deposits following Thursday’s announcement.

Prior to take-off, Aurora Station guests will participate in a three-month certification program. Part of this will be completed online, and the remainder will be completed in a Houston training facility that, like the station itself, has yet to be built.

Still, Orion Span announced plans to launch Aurora Station in late 2021. The 43.5-foot-long hotel would have a diameter of 14.1 feet. It would not require assembly or inflation upon entering zero gravity, and could go into service immediately.

The company hopes to host its first guests in 2022.

The project is expected to cost tens of millions of dollars. It’s currently self-funded with two angel investors, though Orion Span intends to launch a Series A round of financing in the next few months.

Bunger, who lives in the San Francisco Bay area, has a technology background. But others on his team have many years of space experience in Houston.

Aurora Station won’t be limited to tourism, either. Space agencies around the world may find it a more affordable way to access space. It could also support zero gravity research and space manufacturing.