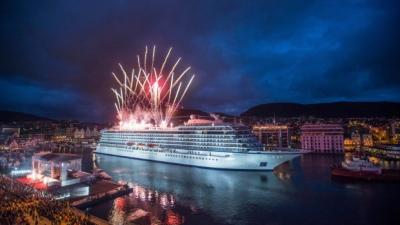 Jan 23, 2018  -  Is there no stopping Viking? The rapidly expanding company recently announced it is building seven new river ships to start sailing in 2019, which will bring its worldwide river fleet to 69. Six of the ships will cruise the Rhine, Main and Danube rivers and the seventh, Viking Helgrim, will cruise Portugal's Douro River. Viking Helgrim joins three Viking ships already sailing on the Douro; carrying up to 106 passengers they are smaller than the 190-passenger Longships but share many of their fleetmates' features, including the streamlined Scandinavian design, Aquavit Terrace and organic herb gardens.

The line's fifth and sixth 930-passenger ocean ships, Viking Orion and Viking Jupiter, launch in July 2018 and February 2019 respectively; four more ocean ships are on the order books, scheduled to debut between 2021 and 2023. When Viking Jupiter joins the fleet in 2019, Viking will be the world's largest small-ship ocean cruise line – pretty impressive for a cruise line that was established just three years ago.

"In 2017 we celebrated our 20th year of business and were named the No.1 Ocean Cruise Line and the No.1 River Cruise Line," Viking Australia and New Zealand managing director Michelle Black says. "We're also expanding our portfolio of cruises, announcing new river and ocean itineraries in the next few weeks."

Ms Black says that Viking Sun, which arrives in New Zealand's Bay of Islands today, will be in Australia in February on its inaugural world cruise from Miami to London; the first time a Viking ship has visited Australia.

"In addition to these milestones, we will start home-porting from Sydney to Auckland in December for three months each year. We're thrilled that guests will no longer need to fly to Europe to experience the Viking difference. Given the sustained demand for our destination-focused itineraries, we are expecting these cruises to be very popular with the Australian and New Zealand markets."

What is the "Viking difference"? According to founder and CEO Torstein Hagen, the cruise line is designed for discerning travellers with interests in science, history, culture and cuisine. He often says Viking offers guests "the thinking person's cruise" as an alternative to mainstream cruises.Traveller Newsletter

Meanwhile Viking Ra, having been completely refitted and refurbished last year, starts operating 12-day cruises on the River Nile in March. Named after the Egyptian sun god Ra, the ship accommodates 52 passengers (all in suites). Demand has been so great that its 2018 departures are sold out and bookings for 2019 close on March 31.

More in this category: « 10 Reasons To Use A Travel Agent Capsule hotel guests can now let off steam in Nordic sauna »
back to top
May 15, 2018