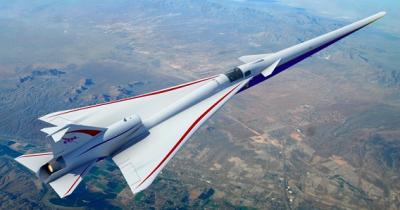 NASA has awarded Lockheed Martin Skunk Works a contract to design, build and flight-test a full-scale experimental aircraft, known as an X-plane, to make supersonic passenger air travel a reality. The project involves reducing the sonic boom, produced by passing through the sound barrier, from an ear-splitting bang to a soft sound like the closing of a car door.

“It is super exciting to be back designing and flying X-planes at this scale,” NASA’s associate administrator for aeronautics, Jaiwon Shin, commented last week.

“Our long tradition of solving the technical barriers of supersonic flight to benefit everyone continues.”

NASA awarded Lockheed Martin Skunk Works a contract in February 2016 for the preliminary design of the supersonic X-plane, which will be built at the Skunk Works facility in Palmdale, California and will conduct its first flight in 2021.  View video

The X-plane is designed to cruise at 55,000 feet at a speed of about 940 mph and create a sound about as loud as a car door closing. That’s a 75 Perceived Level decibel (PLdB), instead of a loud sonic boom.

While the X-plane is designed to fly fast, it won’t fly as fast (or as high) as Concorde or as fast as a new challenger backed by Japan Airlines (JAL) and developed by US aerospace developer Boom Supersonic.

The Boom Supersonic project aims to bring commercial supersonic travel to passengers at fares about the same as today’s business class tickets.

Concorde, the British-French turbojet-powered supersonic passenger airliner that retired from service in 2003, had a maximum speed over twice the speed of sound at Mach 2.04 (1354 mph or 2180 kph at cruise altitude).

Boom Supersonic, meanwhile, is developing a new-generation supersonic aircraft which flies at Mach 2.2. That’s about 2700 kph, which is faster than Concorde.

Boom Supersonic’s developers say their plane will cut flight times in half and drop fares 75% lower than Concorde. JAL is providing its knowledge and experience to support Boom in developing the aircraft, joining the Virgin Group in backing the project. A smaller test aircraft is set to fly this year. See: JAL backs supersonic jets, test-plane to fly this year

Boom Supersonic’s engineers and pilots say they have already made key contributions to 40 new aircraft and conducted test flights to Mach 3 (3680 kph).

Clearly, the race is on!

More in this category: « Tahiti Air Charter launches The Curious Pneumatic Tubes of New York City »
back to top
Apr 17, 2018