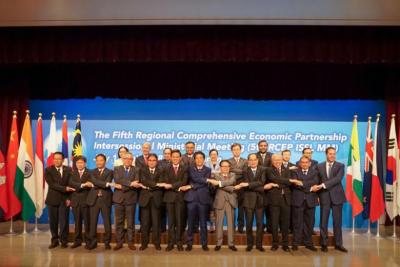 TOKYO - Trade ministers of 16 countries that account for 30 per cent of global trade have re-affirmed their resolve for a regional trade deal that will benefit economies at different levels of development.

The ambitious deal is on track for a substantial agreement by the end of this year, Singapore’s Minister for Trade and Industry Chan Chun Sing said on Sunday (July 1), in what will be a major boost for free trade.

It comes as the threat of a global trade war looms after the United States imposed tariffs that affect imports from China, Europe and Canada, among others.

Progress has been made in working on the obstacles to the Asean-led Regional Comprehensive Economic Partnership (RCEP), though Mr Chan acknowledged that some issues will require greater political will. He was speaking at a news conference in Tokyo alongside Japanese counterpart Hiroshige Seko, with whom he co-chaired a meeting attended by trade ministers of the 16 RCEP countries.

There are high hopes for a substantial deal by the Asean Summit in Singapore in November.

“What is important is that people commit to the process in good faith,” Mr Chan said. “This is so that challenges and each other’s sensitivities can be discussed openly. Each of us can then exercise maximum flexibility in the positions we want to adopt, taking into account not only our own interests, but also those of the partner countries.”

Of the areas that require political decision-making, Mr Seko added: “We should enhance our level of maturity and present a final package with such issues narrowed down.”

Ministers of the 16 RCEP countries – the 10-nation Asean bloc, as well as Australia, China, India, Japan, New Zealand and South Korea – vowed in a statement on Sunday to “work with a greater focus on finding breakthroughs” to achieve a package of year-end outcomes.

A successful conclusion of the RCEP, Mr Chan said, will “send a strong and powerful signal to the world of our belief in free and open trade with benefits for all our respective people”.

However, just two of the RCEP’s 18 chapters have been concluded thus far, and the Tokyo talks did not result in any new chapters being closed.

When The Straits Times asked if this indicates an apparent lack of progress, Mr Chan said that while it may not be immediately evident judging by the number of chapters concluded, “we have narrowed down the gaps and are focused on the outstanding issues” for many of the remaining chapters. “That is why we are confident.”

It is understood that some of the hurdles include e-commerce, intellectual property and market access to sectors such as agriculture.

In this vein, the trade ministers are working towards a deal that will allow economies at different levels of development to “actively participate in and benefit from an open and inclusive regional economic integration”.

“In the principle of rules, we continue to look at quality – but we are prepared to bend flexibly as well,” Mr Seko said.

This is seen to acknowledge concerns of countries like India, where there is support for the RCEP but also fears over the impact on its farming sector – and jobs – were it to open its markets to agricultural imports from countries like Australia and New Zealand.Japanese PM Shinzo Abe urged Asia-Pacific countries to further a free, fair and rules-based economic order, at an RCEP meeting in Tokyo on July 1, 2018.Related StoryJapan PM Shinzo Abe says Asia-Pacific can fly flag for free trade, amid void left by US

The RCEP trade negotiators will next meet in Bangkok from July 17 to 27 for their 23rd session of working-level talks. Their ministers will meet in Singapore in end-August, on the sidelines of the Asean Economic Ministers’ Meeting.

But he said: “All the countries can see the end in sight, and are enthusiastic and determined to reach – and cross – the finishing line.”