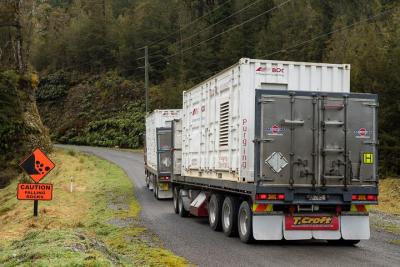 Eight containers holding various components making up a nitrogen plant required for the Pike River Mine re-entry arrived at the mine site today.

The trucks carrying the containers carefully negotiated the narrow road and bridges to the mine site, with markers indicating the line through the middle of each bridge.

“We’ve been planning getting hold of a nitrogen plant for some months, as it’s crucial to being able to safely re-enter the Pike River Mine. Today is a really important milestone for the Agency, even if there’s still loads of work to do before it’s up and running,” Chief Operating Officer Dinghy Pattinson says.

The Agency had received engineering reports showing the bridge structures on the mine road are okay to carry these large loads.

“The advice we received was to centre the weight of the loads when being driven across the bridge, put a 10km speed limit on these bridges,” he says.

Siting and commissioning the nitrogen plant is expected to take around 10 days at least. The plant will be set up next to the mine administrative buildings. Once up and running, it would pump nitrogen into the mine portal, for pre-entry testing to indicate how long it might take to push nitrogen through the mine.

The Pike River Mine workings and drift tunnel are currently full of methane, a gas that is dangerous when mixed with fresh air. The Pike River Recovery Agency’s plan to conduct a safe manned re-entry is based on filling the tunnel with fresh air, so people re-entering can breathe normally without breathing apparatus. To do that, the methane will first be purged from the mine workings and tunnel.

Poly pipe and fittings have been ordered to run two 4.5km pipelines up the hill above the portal, so nitrogen would eventually be able to be pumped into boreholes at the top end of the mine. Lengths of poly pipe will be laid by helicopter to the boreholes – a process that might take several weeks.

The purging process is as follows:

· Flush methane from the mine using nitrogen injection from the portal seal. · Methane will be discharged from the mine through boreholes (one of them yet to be drilled). The purpose of doing this is to establish and maintain a non-flammable inert atmosphere over the roof fall at the end of the drift access tunnel, which has the potential to re-ignite if exposed to fresh air.· (While the current atmosphere of 96% CH4 is both non-flammable and inert, it can form a potentially explosive atmosphere when mixed with fresh air.)· Throughout the drift re-entry phase the roof fall area will be maintained as a nitrogen-rich atmosphere through the injection of nitrogen down the same two boreholes used to flush the methane. This will prevent fresh air being present over the roof fall through the provision of a higher static pressure in the mine workings than that in the drift. · The nitrogen will leave the drift through a borehole on the portal / drift tunnel entrance side of the roof fall.

Three re-entry options have been identified for the project, the preferred option will be selected through the outcome of the technical risk assessment process. However, the sequence of flushing and maintaining the mine atmosphere in a nitrogen-rich state is common to all options. The sequence is illustrated in the following diagram:

The three options for re-entry are:

The agency is aiming to deliver its recommendation about the best method of re-entry, along with other information, to the Minister Responsible for Pike River Re-entry around the end of October, however this will be dependent on the successful completion and outcomes of the Risk Assessment process. Any steps to remove the concrete seal at the portal (mine doorway) would only happen once the Minister has made a decision around re-entry.

More in this category: « Councils adopt plan for future waste minimisation and management PGF invests to build economic development capability in the provinces »
back to top
Sep 14, 2018