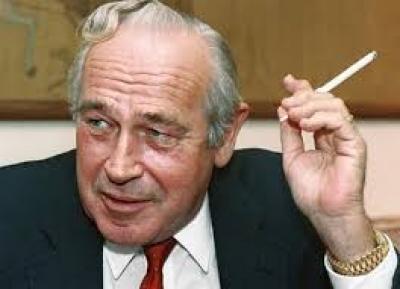 Robert Ludlum the thriller writer was asked how he discovered his rich amalgam of world threatening conspiracy, mystery and corporate greed. “I was leafing through a picture book portraying Germany between the wars,” he explained.

“The population was poverty stricken, hopeless. Then a few pages later this same population became transformed into a picture of purposeful prosperity.

“Hitler had taken over. Hitler had to have external assistance, powerful international helpers. Who and what were they and how did they transform Germany so quickly?”

Thus fired and inspired by this dark mystery as he saw it, Robert Ludlum launched his 27-book dominance of the thriller business in the closing decades of the 20th century.

“Who paid for all those shovels, uniforms, autobahns?”

Robert Ludlum a genial, unpretentious New Yorker who died in 2001 aired in a matter-of-fact manner his lightbulb moment in the course of an Australasian promotional tour.

There are no indications that he ever offered this explanation before or since.

Mr Ludlum filled this informational vacuum with an unmatched series of fantastical conjectures in book and movie form. If he was still writing now Mr Ludlum might consider the following……

Why a defence pact in this case Nato organised to defend its members against a known enemy Russia deliberately puts its head into the mouth of this same threat by depending on it for its strategic fuel supplies.

Who implemented this self-contradictory arrangement? Who or what caused the treaty member governments to embark on this self-defeating strategy? Were there subsidies declared or undeclared? Were there other undisclosed inducements official or semi official?

So who or what suppressed the fact that these same member countries one after another were entering into covenants, contracts, with Russia for anything up to half their fuel requirements?

Why is the Nato defence pact funding to the tune of around $1 billion per day its own opponent?

What happened to the whistle blowers, the individuals and the institutions entrusted with raising the alarm?

There is the matter of the mainstream media. Who or what cowed it into submission as Nato members over so many years one after the other arranged to finance exactly the foe that Nato was designed to protect them from?

What were the factors deflecting them from sounding the alarm when the security of their own countries became so obviously threatened?

Were their allegiances in fact devoted to entities that did not include their own readers, listeners, and viewers? If so what or who were and still are the focus of these undisclosed loyalties and allegiances?

Today’s Robert Ludlum equivalent pondering their own The Scarlatti Inheritance, The Osterman Weekend, The Rhinemann Exchange, The Holcroft Covenant and Bourne conspiracies now have a rich new motherlode.

This includes how the world’s most watched commodities, the energy ones, as a result of this are exploding in cost greatly to the profit of the exporting nations such as Russia.

Someone knows the answer. Who or what are they and more significantly, where are they?

A working Robert Ludlum-style three word title for a thriller based on all this?