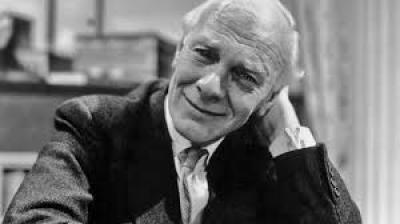 Washington catch cries and rallying calls notably the Defund the Police campaign are supposed to demonstrate officially supported empathy with the deprived and downtrodden. They are received in Russia as indications of irresolution and instability

Russia’s picking off its enemies liquidating them by whatever means wherever they are in the world demonstrates Russia’s horror of internal dissent and the consequent urgency to suppress it.

The failure to comprehend Russia continues to involve the West’s newspapers of record. At the height of the collectivisation- induced great famine of the 1930s the New York Times correspondent in Moscow won a Pulitzer award for claiming that there were no such famines.

Malcolm Muggeridge (pictured) then employed by the Manchester Guardian doubted the New York Times’ bureau head Walter Duranty’s version and went to Ukraine to investigate for himself the plight of the Kulaks. These were the farmers under intense forced collectivisation which caused the starvation known as Holodomor. His reports were buried.

Muggeridge much later toured Australasia and in both countries emphasised how the Russians continuously duped the Western media, and did so through a realisation of the media’s own susceptibility to radicalism combined with its willingness “to be deceived.”

The English speaking realm media/political class consistently fails to grasp the difference between noble-sounding proclaimed priorities uttered in the West and their interpretation when these same concepts make landfall in totalitarian Russia and China.

When the defund the police sloganeering unchallenged by the White House washed up in Moscow the call was taken literally as officially approved agitation of the variety that could be a prelude to a full scale revolution.

Stalin’s Doctors Plot and its ensuing purges was one example. The merest hint, indication, suspicion of a failure to follow the party line, the approved doctrine, triggered the direst of reprisals

Another parallel and another great experiment is the expropriation mooted as far afield as Australia and the Netherlands by the state of farmland in the interests of carbon dioxide/methane minimisation. This chimes with collectivisation. Land seizures in other words.

Similarly the compulsory re-writing of school text books and the pulling down of statues is simply interpreted as a contemporary manifestation of revisionism. The disappearance after a perceived infraction of the official (i.e. party) line from the airwaves of broadcasters in certain Commonwealth countries is regarded in Russia simply as exile.

In the contemporary Cancel culture there is a comparison here with the various purges and plots and show trials in 1930s Russia. The West’s institutional apologies translate as Soviet era Recantations

The current boosted fuel prices leading to increased food prices is seen by the Russians as the inevitable sufferings by the peasantry when such noble experiments as net zero are inflicted on the masses by the intellectual class.

Highbrow political magazines routinely render the useful fools phrase attributed to Lenin as useful “idiots.” This is quite wrong. It is just another example of the West’s tin ear in the Russian intellectual transaction.

“Fools” the original word accurately conveys Lenin’s original and intended meaning. This defines the highly educated and privileged who are anything but idiots. Yet who have susceptibility for unquestioning belief in and a compulsion to promote certain abstract theories.

In this narrow vulnerability only are they Lenin’s fools. The belief that the end of communist Russia in the form of the old USSR was somehow the “end of history” is only one obvious example of the political class’ deliberately encouraged dreamy triumphalism.

Malcolm Muggeridge’s warnings about the West’s institutional willingness to be hoodwinked by Russia have been vindicated by a series of events since the supposed “end of history.”

In 1994 posing as peacemakers Russia persuaded the UK and the US to concur in a scheme known as the Budapest Memorandum which unilaterally stripped Ukraine of all its nuclear weaponry.

The 2014 annexation of Crimea was the first siege stage in land locking Ukraine. All the while Russia encouraged the West in its sacred ideal (which is how Russia sees it) to stop using its own fuel, be politically correct, and depend on Russia’s instead. This allowed Russia to corner the market and set export prices accordingly.

This atmosphere of constant rolling deception slides easily along via an indelible illusion held on the trans Atlantic axis that Germans and Russians remain instinctively at loggerheads. Quite the opposite was and is true. The two races are culturally intensely close.

The Russians watch for weakness. The evacuation of Kabul chimed with the United States losing its grip on its own military and this view was confirmed when top operational figures subsequently held onto their jobs. Was Washington afraid to fire them?

Or were they unpurged because they were zealously pursuing centrally-driven social engineering creeds by tinkering with words and their meanings which mirrors the Leninist belief in perpetual revolution at any and all levels, all the time?

More in this category: « Boris and Scomo Fell Into Tender Trap Boris Progressive Plunge Triggered Ouster by Tory Grandees »
back to top
Oct 08, 2018