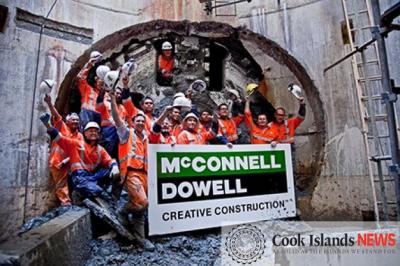 McConnell Dowell has been awarded the contract for Te Mato Vai Stage 2 which includes the design and construction of 10 water intake upgrades.

Awarding of the contract marks a milestone in the progress of the Te Mato Vai project and comes after consent was granted from landowners of all 10 intakes to undertake surveys to provide information for detailed designs.

The scope of Te Mato Vai Stage 2 involves the upgrade of water inlets, construction of treatment facilities, additional storage capacity as well as the replacement of trunk mains and some improvements to access roads.

As part of their design-build contract, the McConnell Dowell team will undertake preliminary surveys, geotechnical investigation, develop detailed designs and do construction.

They will also operate the system with the Cook Islands Government for 12 months at completion of construction as part of a training and capacity building exercise, as well as ensuring the supply meets performance requirements.

McConnell Dowell worked on the Avatiu Port development project for the Cook Islands government and Ports Authority, completed in 2013.

A spokesman for the project said the company’s existing relationships with local resources and the people of Rarotonga would be valuable in the successful implementation of the Te Mato Vai Stage 2 works.

They are relationships that Finance minister Mark Brown says will see the government’s capital investment flow back into the local community and workforce.

A core team from McConnell Dowell will be based in Rarotonga to oversee the Stage 2 works, which will be carried out mostly by local contractors and workers.

GHD New Zealand is the engineer to the contract, and will have a full time presence in Rarotonga for the full duration of construction.

The company is responsible for managing and monitoring the works with regards to performance and compliance to all relevant regulations and quality standards, on behalf of the Cook Islands Government.

Brown acknowledges the lengthy and complex tender process undertaken between GHD New Zealand, the Ministry of Finance and Economic Management, the Crown Law Office and the New Zealand Ministry of Foreign Affairs and Trade, before McConnell Dowell was identified as preferred tenderer on May 23.

Since that time, a final scope has been negotiated for a contract price acceptable to the Cook Islands government.

The contract is worth $34.6 million, and is the outcome of a well prepared construction plan with a scope of work that maximises value for money and will deliver a safe and reliable water supply to the people of Rarotonga.

During discussions, much consideration was given to ensuring that guarantees and warranties for the treatment facilities are in place and that the system can be managed and operated with minimal maintenance.

This negotiation phase also reduced the contract price by $4.6 million without any detrimental effect on the project outcomes.

The spokesman said the tender process had established a productive relationship between the Cook Islands Government, GHD New Zealand, and McConnell Dowell.

The contract is expected to be signed in the next few weeks with preliminary surveys starting shortly afterwards.

A new phase of landowner meetings will be undertaken over coming months, to discuss survey findings, develop the detailed designs and obtain landowners’ consent to proceed with construction.

“Government will continue to work very closely with landowners not only throughout the project but also far into the future as part of the upkeep of this national investment,” says Brown.

According to the project programme the detailed designs will be complete before the end of 2017, with the physical works scheduled to start in 2018. The work will take around two and a half years to complete.