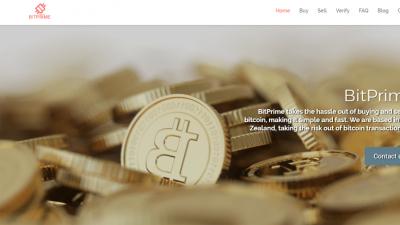 This  morning, New Zealand-based cryptocurrency brokerage BitPrime has released a new service that now allows Kiwis to buy and sell Litecoin (LTC) and Ethereum Classic (ETC) using New Zealand Dollars. BitPrime is a full-service brokerage offering phone and email support, in addition to facilitating cryptocurrency trades. BitPrime has launched these new coins alongside the Ripple, Ethereum and Bitcoin they already stock on their site. The innovative business can also source almost any cryptocurrency from this snowballing asset-class to customers via custom orders.

Litecoin and Ethereum Classic are considered Bitcoin alternatives and they have been quickly gaining traction with investors in the cryptocurrency market. “The popularity of cryptocurrencies in NZ has been increasing rapidly, with trade volumes having grown more than eight-fold since we launched in March,” says Ross Carter-Brown, Senior Partner at BitPrime. As a testament to this, the total cryptocurrency market capitalisation is currently NZD$188 billion at the time of writing, which is an increase of 830% since August 2016.

To date, these “Bitcoin alternatives” like Litecoin, have increased 1520% over the past year with an approximate market capitalization of NZD$3.7 billion. Ethereum Classic has also grown in popularity with NZD$47 million turn-over per day. But what exactly is Litecoin and Ethereum Classic? Essentially Bitcoin, Litecoin, and Ethereum Classic are all cryptocurrencies, with some technical differences between the three.

Litecoin (LTC) was developed by the ex-Google engineer, Charles Lee. Some have said that if Bitcoin is the “gold” of crypto-currencies, Litecoin could be considered the “silver.” Litecoin boasts faster confirmation of transactions than Bitcoin, as well as a higher coin limit of 84 Million (compared to Bitcoin’s 21 Million). It has also been theorised that since Litecoin has a faster block time, this reduces the risk of “double spending” attacks (the same coin being spent twice) and therefore more secure.

A Bitcoin success story that went viral on social media is Kristoffer Koch from Norway. Koch invested around $27 in Bitcoin in 2009 and then forgot about it for four years. He remembered about his Bitcoin wallet in 2013, which had then grown in value to $886,000.

BitPrime’s new launch has opened the markets up for Kiwi investors to buy and sell Litecoin and Ethereum, as alternatives to Bitcoin. As the demand for cryptocurrencies increases, Carter-Brown says, “we aim to make cryptocurrencies easily available to everyday New Zealanders, and expanding our offering is part of achieving that goal.”

You can contact BitPrime at www.bitprime.co.nz or 0800 4333 55 for more information about their Litecoin and Ethereum Classic launch.

More in this category: Mastercard launches its own blockchain payments network »
back to top
Jun 18, 2018