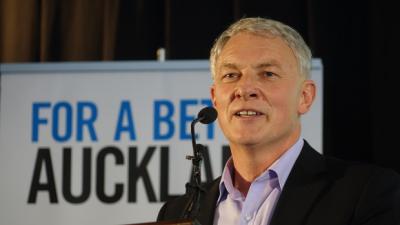 8 Nov  -  Auckland's largest trade delegation, totalling almost 100 delegates from 70 businesses, is convening in southern China for talks on growing the regional economy.  Also taking part in the Tripartite Economic Alliance Summit from Wednesday to Friday is host Guangzhou and Los Angeles.  "Businesses clearly see the advantage of interacting with our two sister cities at the summit," said Mayor Phil Goff, who is leading the Auckland delegation.

"Each are gateway cities to two of the most important and powerful economies in the world."

The Tripartite Economic Alliance, signed in November 2014, is designed to increase economic, trade and investment opportunities for local businesses.

"The summits provide real economic value and jobs to Auckland with deals ranging from hundreds of thousands to millions of dollars sealed as a result of the past two events," Mr Goff said.

Although Guangzhou will be the last of three summits, the parties have agreed to extend the relationship for three more years with opportunities for interaction outside the formal summit process.

More in this category: « David Parker plots a new approach to trade NZ to resume exports of casing to China »
back to top
Mar 22, 2018