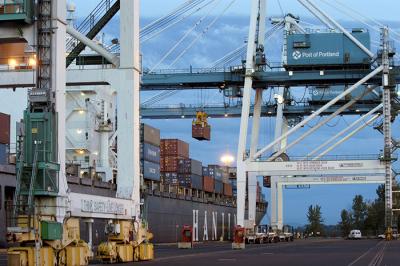 The Port of Portland has had to rely on breakbulk and roll-on, roll-off services to make up for the loss of container calls.

14 Nov 2017  -  Portland’s year-long effort to attract regular liner services back to Oregon’s only container port took an important step forward Monday with the announcement that Swire Shipping will initiate a monthly service that will carry truck exports to Australia-New Zealand and containerized imports from Asia.

“It’s a first step, but a critical first step,” said Keith Leavitt, Portland’s chief commercial officer.” He added, “This is important to us because we have to demonstrate to the trans-Pacific that Portland is back to work.

In addition to its thriving breakbulk and bulk services, Portland for years was an important gateway for containerized exports from Oregon and western Idaho and imports of consumer merchandise, primarily from Asia. At its peak, Portland handled about 340,000 TEU a year.

Portland in 2012 began to experience labor problems when the International Longshore and Warehouse Union became engaged in a jurisdictional dispute with another union. That event escalated into a bitter, three-year confrontation between the ILWU and ICTSI, operator of Terminal 6 at the time. Productivity plunged as the ILWU engaged in work slowdowns that caused Hanjin Shipping, Hapag-Lloyd, and Westwood Shipping to end their liner services.

ILWU officials in Portland accused ICTSI, an international terminal operator based in the Philippines, of running Terminal 6 as a “third-world” operation. Bill Wyatt, the port’s executive director at the time, said the union was upset because when ICTSI took over operation of Terminal 6 in 2010, it began to pull back on wasteful and inefficient work practices that had been common for the many years that Portland managed the terminal as an operating port.

Leavitt said port managers the past year have had a number of meetings with the ILWU locals and they are confident that a return of shipping services will be greeted with improved productivity. “I feel like we’re in a good spot,” he said.

Swire Shipping, which is based in Singapore, will be in charge of handling containers at Terminal 6 when the service begins operating in January. Leavitt said Swire has no presence in Portland and may contract with a stevedore to discharge and load containers. The port will continue to contract with Harbor Industrial Services for the breakbulk stevedoring work. Port authority staff have been working with the ILWU to get the cranes and other cargo-handling equipment back into good working order, he said.

As a river port with draft limitations, Portland is unable to accommodate the mega-ships of 10,000-TEU capacity and greater that are common today at West Coast ports. Nevertheless, Portland is a good gateway for north-south services and niche carriers that do not operate mega-ships, Leavitt said. The base cargo for the new service will be trucks manufactured in Oregon by Daimler Trucks North America. Portland was once a profitable port for importers of containerized merchandise destined for importers in the region. Importers and exporters have been shipping most of their cargo the past two years through Seattle-Tacoma.

The new service will be triangular, carrying mostly non-containerized cargo and trucks from Portland to Australia and New Zealand. The vessels will steam to China and South Korea and will load containerized imports for Portland.