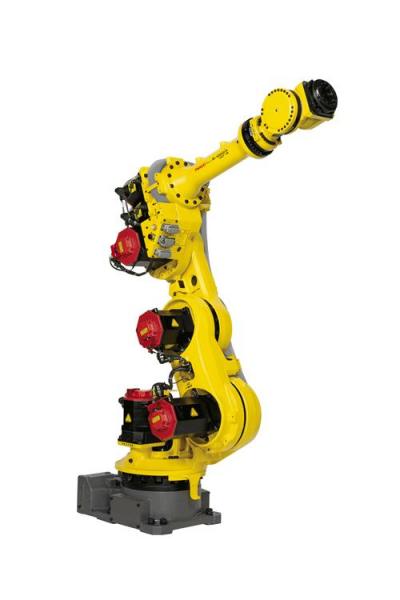 Nov 24, 2017  -   Fanuc America has demonstrated a new automotive spot welding robot at the recent Fabtech event.  The new seven-axis R-1000iA/120F-7B’s design is based on the R-1000iA robot series.  It has a payload of 120 kg and a maximum reach of 2,230 mm. The additional axis allows the robot’s J2 arm to fold into itself, making it shorter and able to operate in very tight workspaces, says Fanuc.

At the FabTech event, the R-1000iA/120F-7B was equipped with integrated Fanuc Servo Gun Control, the Fanuc primary wrist and Solution Arm for spot welding dress out, and a servo weld gun, which performs a spot welding operation on an automotive body side.

Also featured were Fanuc’s latest R-30iB Plus controller with an intuitive iPendant for easy setup and operation.

Tim Holcomb, product manager, Fanuc America, says: “The articulation in the J2 arm now enables the robot to be placed closer to the operating point in a welding application without losing any reach.

“Since the robot can also work overhead and from behind its back, it has an amazingly large work area despite its compact design.”

In addition to spot welding, R-1000iA/120F-7B is designed for other applications including compact palletizing, machine load/unload and other operations with space constraints.