"Asia-Pacific is the fastest-growing economic region in the world," international statistics manager Tehseen Islam said. "Over the last decade, New Zealand's two-way trade with APEC has grown $31 billion, and a $2.6 billion deficit is now a $4 billion surplus."

APEC is the Asia-Pacific's main economic forum where a number of trade agreements are reached. Talks are currently underway at APEC on the Comprehensive and Progressive Agreement for Trans-Pacific Partnership. Eleven of the 21 APEC countries are in the trade talks. 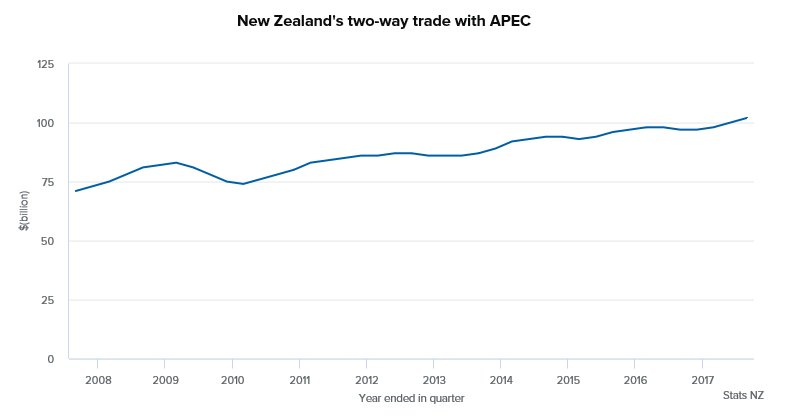 Vehicles lead the way in imports

New Zealand’s main imports from APEC are vehicles, machinery, and equipment. New Zealand imports a large amount of cars and trucks from Japan, Thailand, the US, and South Korea, all of which are APEC nations.

Travel also contributes significantly to our trade surplus with the APEC nations. Visitors and students from APEC nations provided $9 billion to the New Zealand economy in the September 2017 year through exports of travel services, mainly by visitors from Australia, China, and the US.

For more information about these statistics:

More in this category: « Amazon Marketplace - an opportunity for New Zealand firms Focus on NZ brands needed in face of trade uncertainty »
back to top
Jul 25, 2018