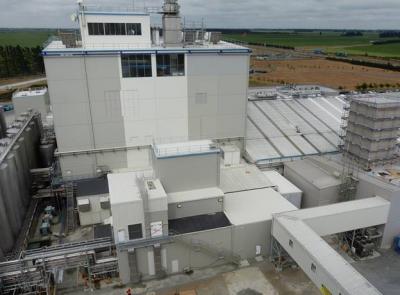 Dec 7,  2017  -  Synlait Milk (NZX: SML; ASX: SM1) has today officially opened its new Wetmix kitchen, which will enable it to simultaneously run both large-scale infant formula spray dryers.  This will double the amount of infant formula powder which can be produced at the Dunsandel site, from 40,000 metric tonnes (MT) to 80,000 MT per year.

“We were at the point where our current Wetmix facility was at capacity, and our consumer demand was continuing to grow. Building this new Wetmix kitchen will relieve that pressure,” says John Penno, Managing Director and CEO.

Synlait has invested $37 million in the new Wetmix kitchen, which is at the core of the production process.

It’s where the dry ingredients (such as dairy proteins, carbohydrates, vitamins and minerals) are mixed into the liquid milk. That mixture is then sent to the dryer, where it is dried into infant formula base powder.

Mixing the dry ingredients into the liquid milk before drying ensures a superior blend quality.

The project has been in planning since December 2015 and contractors began work on site in February 2017. At times there were up to 125 contractors on site per day, but the construction of the Wetmix kitchen did not disrupt the activities of other areas on site.

“We’re really happy with how the build went,” says Mr Penno “it was a smooth process which was completed on time and within budget, without the need to alter our day-to-day operations.”

Designed with staff in mind, some manual steps (e.g. lifting and tipping large bags of ingredients) have been reduced with the help of automation. This creates a safer environment and provides operational efficiencies.

“It was really important for us to make this new facility as user-friendly as possible. We want our employees to be safe at work, and to work under the best possible conditions,” he says.

More in this category: « LegaSea welcomes the creation of a new separate portfolio for Fisheries New Blockchain Project has Potential to Revolutionise Seafood Industry »
back to top
Mar 31, 2018